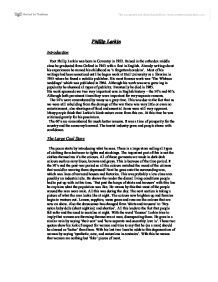 Phillip Larkin Introduction Poet Phillip Larkin was born in Coventry in 1922. Raised in the orthodox middle class he graduated from Oxford in 1943 with a first in English. Already writing about his experiences he named his childhood as 'a forgotten boredom'. Most of his writings had been unnoticed until he began work at Hull University as a librarian in 1955 where he found a suitable publisher. His most famous work was 'The Whitsun weddings' which was published in 1964. Although his work was now growing in popularity he shunned all types of publicity. Eventually he died in 1985. His work spanned over two very important eras in English history - the 50's and 60's. Although both prominent times they were important for very separate reasons. The 50's were remembered by many as a grey time. This was due to the fact that as we were still rebuilding from the damage of the war there was very little or even no entertainment, also shortages of food and essential items were still very apparent. ...read more.

and shorties'. All this leads to the fact that people felt safer and the need to socialise at night. With the word 'flounce' Larkin tries to imply that women are throwing themselves at men, disrespecting them. He goes in a similar vein by saying 'their sort' and 'how separate and unearthly love is'. These two quotes show his lack of respect for women and tries to say that he (as a man) should be classed as 'better' than them. With his last two lines he adds to this degeneration of woman by saying 'synthetic, new, and natureless in ecstasies'. With this he means that women are nothing but 'fake' pieces of meat. Sunny Prestatyn The title refers to a popular holiday resort for example, Butlins, Blackpool etc. the poet has most likely got a postcard of some sort advertising this location. He begins to describe it but seems to be putting more emphasis on the woman on it than the actually place with phrases like 'in tautened white satin' giving the picture of a tight swimsuit. ...read more.

This is also a very crude way of talking about a woman's vagina during sex. After this he contradicts everything he has said about this woman by saying 'she was too good for this life'. I think this is trying to say that she shouldn't have to be put through this mistreatment. That line shows that Larkin is a hypocrite because he has not tried in any way to say anything remotely decent about her all the way through his poem. Straight after this though he says 'now fight cancer is there'. He is now referring to sexually transmitted diseases. The place 'there' is supposed to portray the woman's vagina. Conclusion After going through the history of Larkin and the two poems I think a certain degree of pity must be felt for him. He was raised in a very stressful period in time and this must have affected him greatly. His frustrations were building and his imagination could be expressed through these poems. Though he has grown through all this adversity his views are not acceptable and if I were a female I would be very angry at the content of his poems. ...read more.