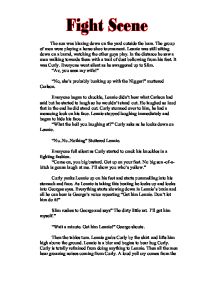 Piece inspired by 'Of Mice and Men'.

The sun was blazing down on the yard outside the barn. The group of men were playing a horse shoe tournament. Lennie was still sitting down on a barrel, watching the other guys play. In the distance he saw a man walking towards them with a trail of dust bellowing from his feet. It was Curly. Everyone went silent as he swaggered up to Slim. "Av, you seen my wife!" "No, she's probably bunking up with the Nigger!" muttered Carlson. Everyone began to chuckle, Lennie didn't hear what Carlson had said but he started to laugh so he wouldn't stand out. ...read more.

"Come on, you big bastard. Get up on your feet. No big son-of-a-bitch is gonna laugh at me. I'll show you who's yellow." Curly yanks Lennie up on his feet and starts pummelling into his stomach and face. As Lennie is taking this beating he looks up and looks into Georges eyes. Everything starts slowing down in Lennie's brain and all he can hear is George's voice repeating "Get him Lennie. Don't let him do it!" Slim rushes to George and says" The dirty little rat. I'll get him myself." ...read more.

George screams as he jumps onto Lennie's arms. "Let go of him Lennie. Let go. Slim, come and help me while the guy got no back left. As the men prize Lennie ofF he is still in a blur, he suddenly just drops Curly and runs onto a haystack crying". You told me to George!" "I know I did Lennie, I know I did",George whispers to Lennie as he sits and comforts him. Slim walks over to Curly who was lying on the floor having lots of short spasms in his back. "Looks like every bone in his back is bust" Slim says as he analysed Curly's injury. ...read more.