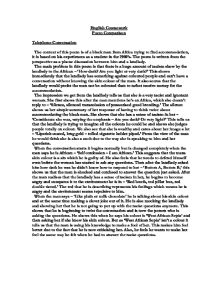 English Coursework Poem Comparison Telephone Conversation The context of this poem is of a black man from Africa trying to find accommodation, it is based on his experiences as a student in the 1960's. The poem is written from the perspective as a phone discussion between him and a landlady. The main problem in this poem is that there is a huge amount of r****m show by the landlady to the African - 'How dark? Are you light or very dark?' This shows immediately that the landlady has something against coloured people and can't have a conversation without knowing the skin colour of the man. It also seems that the landlady would prefer the man not be coloured than to rather receive money for the accommodation. The impression we get from the landlady tells us that she is a very r****t and ignorant woman. She first shows this after the man mentions he's an Africa, which she doesn't reply to - 'Silence, silenced transmission of pressurised good breeding.' The silence shows us her simple summary of her response of having to think twice about accommodating the black man. She shows that she has a sense of r****m in her - 'Considerate she was, varying the emphasis - Are you dark? Or very light?' This tells us that the landlady is trying to imagine all the colours he could be and shows she judges people totally on colour. ...read more.

Also, he feels he wants to make her feel the same way he felt when he had to answer the r****t questions. The attitude of the man changes at the end of the poem from being a polite and respectful to an angry and rude man. But he changes his attitude because of the landlady's judgement of him and decided to show his angry and rage to show that he is not a weak person. The man is now making fun of her and is mocking her at more length when he speaks about his colour - 'Don't you know what it is? That's dark, isn't it?' He then starts to be rude by offering to show his bottom under the pretence of suggesting she meets him before judging - 'My bottom raven black, wouldn't you rather see for yourself.' He does this to make her feel uncomfortable as he was before and tried to put her in a complicated position. The control of power in the beginning of this poem was in the hands of the landlady as she owns the house and is offering the accommodation to the man. As the poem continues her power begins to decrease as the man reverses the situation as he starts to mock her. By the end of the poem the man has gained all the power from the landlady and is so powerful the landlady talks but only when she is asked a question. ...read more.

Also, whenever the interviewer finishes asking a question she also replies for the candidates - 'So glad we agree, Quite so.' This shows that they are so powerless they can't be able to answer for themselves. It also shows us that the interviewees seem that they don't care about receiving criticism and do not have the power to stand up and respond. The character of the candidate develops into being more weaker than she is already. She receives more and more criticism from the interviewer and never has the chance to respond due to the interviewers power - 'What of your education? Where were you educated?' This shows the interviewer is now not even giving the courtesy of a response and instead goes straight onto the next question, showing the interviewee's lack of importance to her. The control of power in this poem was in the hands of the interviewer in the beginning. As the poem continues her power gets stronger and stronger and becomes so strong that at a point you'd forget that the candidates are even present. By the end of the poem the interviewer still has all the power possible in the interview and uses it to great effect against the interviewees. I think the poets reasons for writing this poem is to show people that a person who is in a powerful enough position to make judgements of people can have even more power by showing it and using it to their advantage. ...read more.