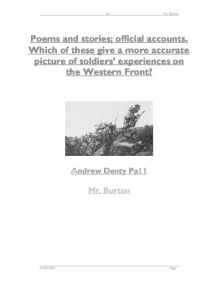 &quot;Poems and stories; official accounts. Which of these give a more accurate picture of soldiers' experiences on the Western Front?&quot;

Poems and stories; official accounts. Which of these give a more accurate picture of soldiers' experiences on the Western Front? Andrew Denty Pa11 Mr. Burton History Coursework- "Poems and stories; official accounts. Which of these give a more accurate picture of soldiers' experiences on the Western Front?" World War 1 broke out in August 1914. There were numerous causes for war, the spirit of intense nationalism that existed in Europe throughout the 19th and into the 20th century, the political and economic rivalry among the largest nations such as France and Germany. Europe was split into two alliances; the Triple Entente, including Great Britain, France, Russia, Italy, and the United States, and the Triple Alliance; including Germany, Turkey, Austria-Hungary and Bulgaria. The immediate trigger of the war was the assassination of Archduke Francis Ferdinand on June 28th, 1914, in Austria-Hungary. This question asks me to evaluate sources, and so it is important to define its key terms. The Western front was a line of trenches stretching from the Belgium coast in the north to Switzerland in the south. This is where the majority of conflict took place. Victories on the battlefield were soon being measured in yards and stalemate set in. Conditions in the trenches were very poor; they were muddy and full of rats. The German trenches were much better dug-in than the Allies trenches. The Allies believed the war wouldn't last long, so there was no point in improving them. German trenches also had better vantage points than the Allies trenches. A map of the western front, from Compton's encyclopaedia. World War One produced a mass of poetry. Some were written by soldiers, such as Siegfried Sassoon's "The General". Other poems were written by people who had not fought in the war, and so are less likely to give an accurate portrayal of conditions on the front line. Poetry from World War One can be split up into to groups; poems from the early stages of war (1914, 1915), which tend ...read more.

decorum est pro patria Mori," this is a warning to young men who have not yet signed up for the war, and to the parents of these young men, saying that war is not glorious, and that it is not right and glorious to die for your country. This is the whole point of the poem; to warn people at home of the terrors of war. To make this warning as shocking and as effective as possible he has used descriptive language, which may well have been used to exaggerate the situation. Owen is just using the subject of gas as a vehicle to for fill his objective, to warn people about war; this seriously affects the reliability of this source. This poem is very one sided, only talking about the most terrible experiences; it overlooks less interesting occurrences to gain the readers attention. A point I need to take into account is that Owen wrote this poem whilst in Hospital suffering from shell shock; this would affect his mental state at the time of writing, so possibly causing him to exaggerate on certain points. Owen spent a long time on the front line, so probably witnessed many gas attacks. After a while memories become less clear, especially for events that occur more than once, so Owen could have written the poem including the worst bits from each of the attacks he witnessed. Also he may have intentionally taken the most shocking parts from each gas attack he witnessed in order to achieve his goal, which was to warn people about the horrors of war. This seriously affects the reliability of this source. In conclusion I think that this source has its limitations, however it seems to agree with many other sources, even if it is slightly exaggerated. The next source I will be studying is an official account, a photograph of British soldiers blinded by mustard gas. ...read more.

Official accounts are perhaps in some cases the least reliable of the sources I have studied due to censorship and the use as propaganda, however in my opinion they are the most useful source I have studied. This is because official accounts include a wide range of sources which can be looked at and compared with poems and stories, which often tend to be exaggerated. Not all official accounts I have looked at are censored, for example John Singer Sargent's "Gassed" (1918) which is a shocking painting of soldiers killed and injured by a gas attack. This source is very useful and in my opinion very accurate, as it is similar to a photograph. My hypothesis was not entirely accurate as far as official accounts were concerned. I started studying them with a preconception that they would be completely unreliable and of little use. Stories are particularly useful for giving running descriptions and conveying what a soldier is going though. Stories are not censored However many stories were written after World War One, so there were issues of memory, also the incentive of getting a piece published can affect the way in which the author writes. Many stories and letters written during the war are censored, to protect the author's family. A story I found particularly useful was Charles Young's interviewed about his war experiences in 1984, although it has its disadvantages, it contains a lot of useful information about why morale was low during the war, and clues to soldiers attitudes. I am unsure as to whether I can select one type of source as being the most accurate; however I can say that each type has its own strengths. As a result of my work I have found that Stories and poems tend to be the most accurate source types, however the most useful tend to be Official accounts and stories. I have found that in order to come to an accurate conclusion a wide range of sources is needed, as each source and source type has it's of strengths and weaknesses. ...read more.