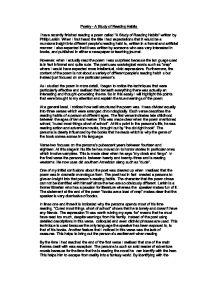 Poetry - A Study of Reading Habits.

Poetry - A Study of Reading Habits I have recently finished reading a poem called "A Study of Reading Habits" written by Philip Larkin. When I first heard the title I had expectations that it would be a mundane insight into different people's reading habits, written in a formal and artificial manner. I also expected that it was written by someone who was very interested in books, and published in either a newspaper or teaching journal. However, when I actually read the poem I was surprised because the language used is in fact informal and quite rude. The poet uses scatological words such as "c**p" where I would have expected more intellectual, vivid expressions. Furthermore, the content of the poem is not about a variety of different people's reading habits but instead just focused on one particular person's. As I studied the poem in more detail, I began to notice the techniques that were particularly effective and realised that beneath everything there was actually an interesting and thought-provoking theme. So in this essay I will highlight the points that were brought to my attention and explain the true meanings of the poem. ...read more.

The expression "it was worth ruining my eyes for" means that he must have read too much, despite warnings from his family. Instead of the poet using detailed descriptions in this verse, colloquial and even clich�d phrases are used. This technique is used because the only language the speaker has been exposed to, is that of his books. Another feature that I noticed in this verse was the lack of caesuras. This helps to bring out the persona's excitement when reading. By the time I had reached the end of the first verse I realised that one of the main themes dealt with was escapism. The persona is such an avid reader of adventure novels because for the time that he is reading the novel he can identify with the hero. This helps him to escape from reality into a fantasy world. By identifying with the hero, it helps him create a positive self-image and makes him feel better about his problems. Between verses one and two, there is a time lapse which is indicated by "later". The speaker now has also succeeded in ruining his eyesight because he now wears "inch-thick specs". ...read more.

His attitude towards books is now being reflected in the poem, in particular the last two lines. The phrase "Get stewed" tells us that the persona now finds his escape in alcohol and probably gets drunk regularly. He finds this relief more effective than books because it is better at helping him forget. The poet's control of line length and word choice make the condemnation of the last line powerful and dramatic. The words used "Books are a load of c**p" act as a bold statement and the mild swearing conveys the persona's feelings precisely. He feels as if he has been let down by books and that he was gullible for ever believing in them. In conclusion, though the title suggests a dry, academic study into what people read, it is anything but this. It is written in a lively colloquial style and highlights important points about people and their psychology. In terms of theme, it is being suggested that the role of media in society is becoming too involved with people's lives. The persona in this book, for example, started to mistake fantasy with reality and become far too dependent on it. When he finally emerged from his fantasy world he was left in shock because he realised what the world was actually like. ...read more.