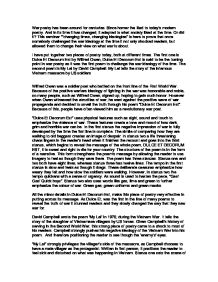 War poetry has been around for centuries. Since homer the Iliad to today's modern poetry. And in its time it has changed, it adapted to what society liked at the time. Or did it? This seminar ""changing times, changing ideologies" is here to prove that once somebody challenged the war ideology at the time it not only shocked readers, but allowed them to change their view on what war is about. I have put together two pieces of poetry today, both at different times. The first one is Dulce Et Decorum Est by Wilfred Owen, Dulce Et Decorum Est is said to be the turning point in war poetry as it was the first poem to challenge the war ideology of the time. The second poem is My Lai by David Campbell. My Lai tells the story of the infamous Vietnam massacre by US soldiers Wilfred Owen was a soldier poet who battled on the front line of the First World War. Because of the positive warfare ideology of fighting in the war was honorable and noble, so many people, such as Wilfred Owen, signed up, hoping to gain such honor. However when Owen witnessed the atrocities of war, he went against the positive wave of war propaganda and decided to unveil the truth through his poem "Dulce Et Decorum Est". ...read more.

David Campbell wrote the poem 'My Lai' in 1970, during the Vietnam War. It tells the story of the slaughter of Vietnamese villagers by US forces. Given Campbell's history of serving in the Second World War, this strong piece of poetry came to a shock to most of his readers. Campbell strongly pushes his negative ideology of the Vietnam War into his poem. And therefore positioning the reader to see though the 'enemy's' eyes. "My Lai" strongly privileges the villager's side of the massacre, as Campbell chooses to have a male villager as the protagonist. Written in first person, it positions the reader to feel sick and disturbed on what was happening in Vietnam. Stanza one sets the scene of the beginning of the attack. The first line is an Enjambment into the second and third line. Use of symbolism in the last line of the first stanza, "and the blue milk spilt and ruined". The words blue milk implies that the slaughter was under a new moon, a blue moon, and that the new moon was ruined because blood was spilt on that night. Use of metaphor intensifies the first couple of shootings. It uses visual techniques to imply the US forces were killing the villagers, as the villagers would harvest their crops by juxtaposing the rifle fire to the word harvest. ...read more.

However, Dulce Et Decorum Est was written about the first world war and the soldiers that took part. Whereas My Lai is written about the Vietnam War and the slaughter of villagers by US forces. However, both poems express the view of how both poets thought in terms of the war. They both thought it was horrible in what happened and they clearly put across that message. My Lai uses a Vietnamese villager as the main character of the poem whereas Dulce Et uses an Australian soldier. Campbell who uses his imagination and ideological values to express his poem, unlike Owen uses his own experiences in the war to help write the poem. War poetry has been around for centuries. From the Canterbury tales in the medieval period to today's modern poetry. And when it changes, the ideology on war for that time changes. Wilfred Owen shocked readers by challenging the ideology that fighting and dieing for your country was the "sweet and right" thing to do. After this turning point, war poetry continued to express what the writer had to say. This is shown in My Lai more than 50 years later. My Lai expressed what David Campbell had to say about the Vietnamese war. They both thought war was atrocious because people were killed in the most demeaning manner and they clearly put across that message. thank you ...read more.