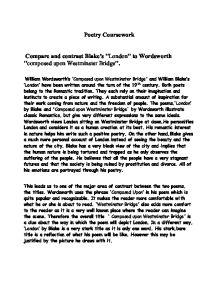 Poetry Coursework Compare and contrast Blake's ''London'' to Wordsworth ''composed upon Westminster Bridge''. William Wordsworth's 'Composed upon Westminster Bridge' and William Blake's 'London' have been written around the turn of the 19th century. Both poets belong to the Romantic tradition. They each rely on their imagination and instincts to create a piece of writing. A substantial amount of inspiration for their work coming from nature and the freedom of people. The poems,'London' by Blake and 'Composed upon Westminster Bridge' by Wordsworth illustrate classic Romantics, but give very different expressions to the same ideals. Wordsworth views London sitting on Westminster Bridge at dawn.He personifies London and considers it as a human creation at its best. His romantic interest in nature helps him write such a positive poetry. On the other hand,Blake gives a much more personal account of London instead of seeing the beauty and the nature of the city. Blake has a very bleak view of the city and implies that the human nature is being tortured and trapped as he only observes the suffering of the people. He believes that all the people have a very stagnant futures and that the society is being ruined by prostitution and divorce. All of his emotions are portrayed through his poetry. ...read more.

In addition,Blake uses imagery to create more effects in his readers. He uses the image of a church to criticise religious establishments and a palace to signify the state and authorities that control it 'Every black'ning church appals'. He creates another image of the soldier's sigh running in blood down palace walls ,'And the hapless soldiers cry/ Runs in blood down palace walls'. This is implying that the King does not care for the soldiers just as the church does not care for the children. He uses these metaphors to shows how the King can replace his soldiers with ease as he doesn't care about them even though they fight and die for him. Also,the metaphor 'Youthful harlot' plays an important part in the final stanza of the poem. The image of the youthfulness of the prostitute reflects the life for the poor in London at that time. The 'Harlot's curse' is the s******y transmitted diseases which she has spread. The 'new-born infants tear' refers to the crying of, either the prostitute's illegitimate child who is not properly cared for, or the child who has no parents due to the diseases which caused by the prostitutes. The 'marriage hearse' shows how marriages have been split up and killed by these plagues. ...read more.

In contrast, the ending of Blake's poem is explaining that the society is going to die, it is degenerated by the images of the loss of innocence.The possibility of a future for the family structure is bleak, as it can't survive on orphans and prostitutes. In conclusion, it is astounding that two popular, well-known poets could have such different views about the same place, London. Each poet may have set out originally to write the poem in their own certain way, and so for this reason chosen the time, the perspective and whether they were moving or stationary to suit their original decision. Blake is concerned with the negatives of life in London. His poem is about the effects of the city on its inhabitants . In contrast,Wordsworth is focusing on the city in the morning, and does not mention seeing people. There are many more contrasts than comparisons in the two poems and this is obvious as they have different views of London. I prefer Blake's poem ' London'. This is because the meaning of the words is more clear-cut. I accept that the point of the Wordsworth poem may be to leave it up to the reader to decide whether or not the poem is sarcastic. But I don't consider this device to be particularly effective. In my opinion, Blake's poem is more emotional and melodramatic. ...read more.