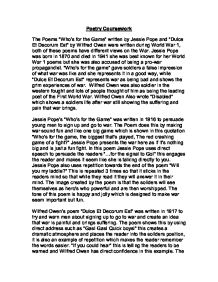 Poetry Coursework The Poems "Who's for the Game" written by Jessie Pope and "Dulce Et Decorum Est" by Wilfred Owen were written during World War 1, both of these poems have different views on the War. Jessie Pope was born in 1870 and died in 1941 she was best known for her World War 1 poems but she was also accused of being a pro-war propagandist. "Who's for the game" gave soldiers a false impression of what war was like and she represents it in a good way, while "Dulce Et Decorum Est" represents war as being bad and shows the grim experiences of war. Wilfred Owen was also soldier in the western fought and lots of people thought of him as being the leading poet of the First World War. Wilfred Owen Also wrote "Disabled" which shows a soldiers life after war still showing the suffering and pain that war brings. Jessie Pope's "Who's for the Game" was written in 1916 to persuade young men to sign up and go to war. ...read more.

the tone of the poem is very blunt, realistic and you can tell it is very truthful by the language he uses in the poem. The way that Owen describes a horrid gas attack makes the reader realise just how scary the war can be it can also remind the reader that they could get killed and not come back home at all. This poem gives you a completely different imagery on war, it lets you see war as being very tiring and shows hurt people injured instead of having fun, this creates a warning signal for the reader and could scared them off the idea of going to war. The way the gas attack is described ""He plunges at me, guttering, chocking, drowning." This makes it sound like a nightmare of someone dying in front of you and you can't help them. Owen wrote this poem to show men the truth about war and he directly challenges Jessie Pope's poem with her idea of war being a big fun game. ...read more.

I think that Wilfred Owen directly challenges Jessie Pope's poem very well, he does this by mainly just being honest to the readers. The main points that he challenges back in disabled is heroism, because Jessie Pope says "Who wants a turn himself in a show" which would mean that they would be the centre of attention in a good way and have everyone looking up to them however Owen challenged that line in disables by saying "All of them touch him like some queer disease" which is saying yes you will get attention but it wont be good, and people wont look up to you for going to war as much as Jessie Pope makes out. In "Dulce Et Decorum Est" Wilfred Owen challenges Popes "Who's for the Game" by telling the war as totally the opposite to Pope's happy fun idea of war. In my opinion I think that all of the poems do a terrific job of persuading the readers either against war or for it, but I think that "Dulce et Decorum est" is the most effective because its truthful and makes the reader think that it is more realistic. ...read more.