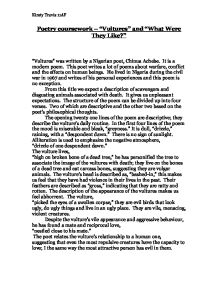 Poetry coursework - "Vultures" and "What Were They Like?" "Vultures" was written by a Nigerian poet, Chinua Achebe. It is a modern poem. This poet writes a lot of poems about warfare, conflict and the effects on human beings. He lived in Nigeria during the civil war in 1967 and writes of his personal experiences and this poem is no exception. From this title we expect a description of scavengers and disgusting animals associated with death. It gives us unpleasant expectations. The structure of the poem can be divided up into four verses. Two of which are descriptive and the other two based on the poet's philosophical thoughts. The opening twenty one lines of the poem are descriptive; they describe the vulture's daily routine. In the first four lines of the poem the mood is miserable and bleak, "greyness." It is dull, "drizzle," raining, with a "despondent dawn." There is no sign of sunlight. Alliteration is used to emphasize the negative atmosphere, "drizzle of one despondent dawn." The vulture lives, "high on broken bone of a dead tree," he has personified the tree to associate the image of the vultures with death; they live on the bones of a dead tree and eat carcass bones, suggesting they are vulgar animals. The vulture's head is described as, "bashed-in," this makes us feel that they have had violence in their lives in the past. ...read more.

"What were They Like?" Show us a before and after the Vietnamese war. It tells us about ordinary people's lives before the war and how their lives changed after the war. Verse one is before the war. It asks six questions about the people's way of life, culture, behaviour and language. The questions are written in the past tense; the war has finished its over. The second half of the poem, verse two is the six "answers" although her answers are vague. The answers are after the war and the poet portrays a sense of loss, destruction and devastation and a clear sense of change. The opening question tells us that the poet's sympathies lie with the Vietnamese people; we can tell this by the way she spells "Viet nam," this is the traditional spelling. "Did the people of Viet nam use lanterns of stone?" All the questions are in the past tense, they ask what life was like before the war and how it changed during and after the war. Before the war the Vietnamese people were very old-fashioned, "lanterns of stone?" They had no electricity. "Ceremonies to reverence the opening of buds?" They followed traditions similar to western traditions like harvest, had a respect for the natural world and were religious people. "Were they inclined to quiet laughter?" They were quiet, modest and gentle. "Did they use bones and ivory?" They had jewellery made of ivory, not the "bling bling!" ...read more.

the sense of loss that every family feels in any war or situation. Both poets make a number of moral points about people's behaviour in the past and future. The main focus of both poems is the universal idea of war and its affect on people and their lives and cultures. Although the poems were focused on Vietnam and Africa, you can relate them to any war taking place around the world. "Vultures" suggests a theory that there is the capacity of good and evil in everyone. "What were They Like?" suggests that people are either good or evil. The poet thinks that the American people are evil and the Vietnamese people are good, this is linked with the idea of civilised and uncivilised society. People can justify anything. The commandant in "Vultures" his job is justified as is the Americans inhumanity in "What were They Like?" Both poems use specific events in history to portray something else, warfare and the effect of it and victims and their attackers. Both poems illustrate a clear picture of war and the cruelty and unfairness of it, they are both effective in displaying the effects of war. "Vultures" displays a graphic view of the devastating effects of war, whereas "What were They Like?" displays a not so graphical and vivid image but is more emotional and hard-hitting. I don't think that either poem was more effective than the other. They were both extremely shocking in different ways and both poems raised awareness of the effects of war and they both shocked and horrified me. ?? ?? ?? ?? Kirsty Trevis 11AF ...read more.