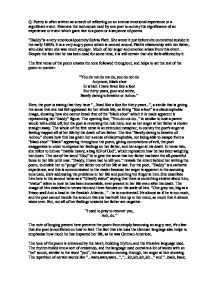 Poetry is often written as a result of reflecting on an intense emotional experience or a significant event.

Q: Poetry is often written as a result of reflecting on an intense emotional experience or a significant event. Examine the techniques used by one poet to convey the significance of an experience or event which gave rise to a poem or a sequence of poems. "Daddy"is a very emotional poem by Sylvia Plath. She wrote it just before she committed suicide in the early 1960's. It is a very angry poem which is centred around Plath's relationship with her father, who died when she was much younger. Much of her anger and emotion arises from this event. Despite the fact that he has been dead for some time, it is still certain that she feels affected by it. The first verse of the poem creates the tone followed throughout, and helps to set the rest of the poem in context: "You do not do not do, you do not do Anymore, black shoe In which I have lived like a foot For thirty years, poor and white, Barely daring to breathe or Achoo." Here, the poet is stating that they have "...lived like a foot for thirty years...", a simile that is giving the sense that she has felt oppressed for her whole life, as living "like a foot" is a claustrophobic image, showing how she cannot break free of the "black shoe" which it is made apparent is representing her "daddy" figure. ...read more.

The fact that she uses the German language also helps to emphasise how much he has impacted her life, as he was German-American. The tone of the poem is enhanced by the harsh, building rhythm, and the fricative language used. The rhythm builds into a sort of crescendo, and the language used contains a lot of words with an "oo" sound, similar to the word "you", the accusation coming through, her anger at him showing. The repetition of certain words like "...wars,wars,wars...", "...ich,ich,ich,ich..." and "...back, back, back..." add to the marching rhythm which drives the poem. By the time we get to the heart of this long rant of a poem the imagery relating to her father deliberately becomes confused with that of n**i atrocities. Furthermore, sometimes Plath's attitude towards her father seems to be more suited to that of a lover; how for instance she sees him as the "...black man who/Bit my pretty red heart in two." The experience of her father's death had led her to identify with victims of Nazism, which could be seen as particularly self-indulgent on her part, as the comparison seems to be out of balance. "An engine, an engine Chuffing me off like a Jew. A Jew to Dachau, Auschwitz, Belsen. I began to talk like a Jew. I think I may well be a Jew." ...read more.

By the end of the poem when she claims "Daddy, daddy, you b*****d, I'm through.", it can be interpreted in more than one way. The first, that she is through with her "daddy" that she has exorcised him from her life at last. But secondly, that it has been too much, that the burden has killed her - Sylvia Plath committed suicide soon after the poem was written. "Daddy" is full of emotion. It allows the poet to exorcise her father from her life, and so it is conflicted and features anger, love and the accusing tone highlights the poet's feelings towards her father, how she hates him for his death early in her life, but there are hints of longing throughout. The n**i imagery used in the poem could be said to be self-indulgent of the poet, but it is perhaps justified in that she has carried the burden of mourning for her father for the majority of her life. The poet shows her father as an evil figure, so it is easy for the reader to sympathise with her, although it is important to remember that the image she paints of him is exaggerated and so the only "bad" thing he did was to die too early in Plath's life. And so, the poem could be interpreted as a rant at her dead father, but to the poet, he's been present in her mind throughout her life, and "Daddy" was how she was able to rid herself of him. ...read more.