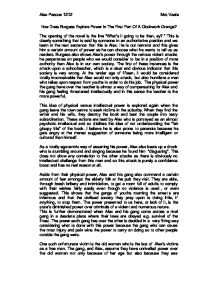 Power In The First Part Of A Clockwork Orange

How Does Burgess Explore Power In The First Part Of A Clockwork Orange? The opening of the novel is the line "What's it going to be then, ey?" This is clearly something that is said by someone in an authoritative position and we learn in the next sentence that this is Alex. He is our narrator and this gives him a certain amount of power as he can choose what he wants to tell us as readers. Burgess also shows Alex's power through the various violent attacks he perpetrates on people who we would consider to be in a position of more authority than Alex is in our own society. The first of these instances is the attack upon a schoolteacher, which is a clear and obvious indicator that this society is very wrong. At the tender age of fifteen, it would be considered totally inconceivable that Alex would not only attack, but also humiliate a man who relies upon respect from youths in order to do his job. The physical power the gang have over the teacher is almost a way of compensating for Alex and his gang feeling threatened intellectually and in this sense the teacher is the more powerful. ...read more.

survival of the fittest. The power each gang has over the other is decided in a very fitting way considering what is done with this power because the gang who can cause the most injury and pain wins the power to carry on doing so to other people outside the gang wars. One such unfortunate victim is the old woman who is the last of Alex's victims as a free man. The gang, and Alex, assume they have unrivalled power over the old woman not only because of her age but also because they see themselves as untouchably strong in fights and aggression. However, Alex's power seems to be with his gang because, contrary to his own beliefs, he finds he cannot do the robbery alone and is shocked to find the old woman beating him with a stick. This is a very strange thing to happen to Alex as he sees himself as above the possibility of actually getting hurt. However, it is clear that this invulnerable character is only as such when he is supported by his gang, who are given very little credit throughout the first half of the novel for their various roles within the crimes. ...read more.

Throughout the first part of the novel, Alex uses barbaric force and pure physical strength to overpower his enemies and victims. He sees this as proof of his own undeniable strength when, in fact, it is down to his gang that he is not harmed by his numerous encounters with violence. His egotistical delusions lead him to believe that he can impose his power upon someone by himself and this over-confidence ultimately concretes his arrest. From this point, the readers of this novel would expect to see the police processing and punishing Alex harshly but effectively and humanely. Instead, we realise that the police are so used to seeing the violence that they no longer try to avoid it and instead resort to it themselves. We are shown that power has changed hands dramatically over the course of the first part of the novel but we can also recognise that the way in which the power is gained and exerted does not change in the slightest as it passes from criminals to civilians to policemen. This is a very interesting comment on the dystopian society presented to us in this book and serves as a powerful warning for our own future. Alex Pascoe 12D2 Mrs Veale ...read more.