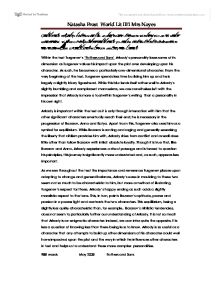 Presentation of Arkady as One-Dimensional

Characters in plays and novels are usually multi-dimensional. Discuss to what extent this is true of important characters you have studied and comment on the techniques of characterisation used by the author. Within the text Turgenev's 'Fathers and Sons' Arkady's personality loses some of its dimension as Turgenev values his impact upon the plot over developing upon his character. As such, he becomes a particularly one-dimensional character. From the very beginning of the text, Turgenev spends less time building him up and he is largely a slightly blurry figurehead. While this blur lends itself rather well to Arkady's slightly bumbling and complacent mannerisms, we are nonetheless left with the impression that Arkady is more a tool within Turgenev's writing than a personality in his own right. Arkady is important within the text as it is only through interaction with him that the other significant characters eventually reach their end; he is necessary in the progression of Bazarov, Anna and Katya. ...read more.

Bazarov and Anna are both multi-dimensional, as they are well built-upon throughout the text and their general backgrounds are highly detailed. We are told a large amount about their histories; in particular the way that this has changed them as people. Anna's upbringing has forced her to be ruthless, enterprising and unemotional and thus has her seeking solace in routine and tranquillity, while Bazarov's doting father has always incited him to question everything and evidently utterly adores his son; as such, Bazarov seeks justification for everything and is totally self-assured. On the other hand, Arkady has had a childhood for the most part untroubled and comfortable. Though we are introduced to Pavel and Nikolai and see the respect he has for them, their effect upon him is chiefly unexplained. The level of physical detail of most of the major characters of the text is very high and Turgenev gives the reader a clear mental image; Anna has a 'prominent forehead' and magnificent shoulders, Pavel extremely well put together, even the mysterious Princess X has '...haunting eyes'. ...read more.

His relationship with Anna is also important as, in patronising him somewhat, it helps the reader to understand more about her: the way she sees herself as being older, that she is blinkered to Arkady's subdued ardour and that she is motherly and slightly condescending. Her attitude to him is also colours her attitude to Katya who she views as his equal and the way Katya's submissiveness has been affected by her upbringing by Anna. Though there should be no doubt that Arkady is a significant character and that his impact upon the plot and the other individuals in the text is exceedingly important, he himself is largely uncoloured and loses a lot of personality in his usefulness. As such, the most important dimension to this character is how easily the writer can mould him to affect those around him. In doing so, Turgenev sacrifices our interest in the character and makes him principally one-dimensional, particularly in comparison to the extremely complex Bazarov and Anna. ?? ?? ?? ?? Natasha Frost World Lit IB1 Mrs Noyes 988 words May 2008 Fathers and Sons ...read more.