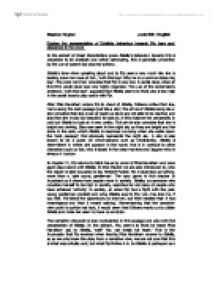 Explore the representation of Estella’s behaviour towards Pip here and elsewhere in the novel.

In the extract of Great Expectations given Estella’s behaviour towards Pip is presented to be snobbish and rather patronising, this is generally presented by the use of speech but also her actions.

Estella’s tone when speaking about and to Pip seems very much like she is looking down her nose at him, ‘with this boy! Why he is a common labouring boy’. The word common connotes that Pip is very low in social class, when at this time social class was very highly regarded. The use of the exclamatory sentence, ‘with this boy!’ suggests that Estella seems to think she is too high in the social class to play cards with Pip.

After Miss Havisham orders Pip to shout of Estella, Dickens writes that she, ‘came along the dark passage just like a star’, the simile of Estella being like a star connotes that she is out of reach as stars are not able to be reached and also that she is cold but beautiful to look at; in this instance her personality is cold but Estella to look at is very pretty. This simile also connotes that she is bright and shining. Stars are seen in the night sky so they are bright and the shine in the dark, which Estella is described as doing when she walks down the ‘dark passage’; this obviously represents the night sky. A star is also known to be a guide (in circumstances such as Christianity). Estella is intermittent in where she appears in the novel; this is in contrast to other characters such as Joe, who is based in the deep marshes and Jaggers who is always in London.

In chapter 11, Pip returns to Satis house by order of Miss Havisham and once again plays cards with Estella. In this chapter we are also introduced to, who the reader is later educated to be, Herbert Pocket. He is described as nothing more than a ‘pale young gentleman’. The card game in this chapter is important as it shows how people move in society. Estella; as someone who considers herself to be high in society, searches for company of people who have achieved ‘winning’ in society, so when Pip has a fight with the pale young gentleman (pocket) and wins, Estella says to Pip, ‘you may kiss me, if you like’. Pip takes the opportunity to kiss her, but then realises that it was meaningless and ‘that it meant nothing’. Remembering that the narrative view point is opinion not fact, it would seem that Dickens wants us to dislike Estella and make her seem to have no emotion.

The narrative viewpoint is also represented in this passage and aids with the presentation of Estella. In the extract, Pip, seems to think he heard Miss Havisham say to Estella, ‘well? You can break his heart.’ This is the impression that Pip received when hearing Miss Havisham answer to Estella, so as we only know the story from a narrative view, we are not sure that this is what was actually said, but what Pip thinks it is. As Estella is portrayed as a spoilt child, breaking his heart, as Pip thought Miss Havisham told her to, could be suggesting that Pip is just a toy who she could break at any time and due to her being portrayed as spoilt he/it can be replaced whenever she becomes bored of it.

Once again, Estella addresses Pip as, ‘boy’, carrying on that she is above Pip in social class and that she has no respect for him. Dickens describes Estella’s tone when asking this, to be with ‘greatest disdain’ this once again presents Estella to have no respect for Pip and to signify that he is below her. Also, the new concept of having no interest in what Pip has to say. Due to this, the reader has almost instantly created a dislike to Estella, because of her actions and uninterested approach to Pip; as the reader has taken to Pip as the narrative voice of the novel. As Pip, has been brought up in different circumstances and within different classes he disregards these remarks and uses his politeness to Estella, by addressing her as ‘Miss’, this respect and politeness from Pip is blatantly unrequited.

Later on in the novel, chapter 29, Estella marries the cruel nobleman Drummle, a man who attends tutoring sessions at the Pocket’s house with Pip, as she seeks people who are ‘winners’ of society this man is who she has found to be a winner and also he has a lot of wealth. Estella is unhappy in the marriage and it would seem she only married him because of his place within society and his wealth, this shows her shallowness and materialism.

In the extract, Estella carries on to call Pip ‘boy’ this carries on the readers’ impression of her being a snob. Dickens also writes the word ‘disdain’ to describe how she says something to Pip, Dickens uses this adjective more than once to show the audience how horrible Estella really is towards Pip.

When Estella starts to describe Pip she says that he has ‘coarse hands’ and ‘thick boots’, the use of the adjective ‘coarse’, adds to Estella’s presentation of being upper class and snobbish. The word coarse means vulgar and common, Estella is obviously saying this to Pip in order to try and make him feel bad about himself and to give him low self esteem. His 'thick boots’ obviously describe the shoes which he is wearing and these are evidently not to be worn with his Sunday best; in the eyes of someone who is high in social class.

After Pip hears this off Estella, he thinks to himself, ‘I had never thought about being ashamed of my hands before’, this obviously shows how much of an impact Estella has had upon Pip as she is now making him feel insecure and leaves him questioning himself. ‘Her contempt for me was so strong, that it became infectious, and I caught it.’ This is also what Pip thinks to himself after hearing what Estella thinks about him, he now believes this view of himself to be correct. Dickens uses the extended metaphor of her contempt being like an infectious illness, and Pip has described it as ‘strong’ in order to make Estella look bigger in the eyes of the reader.

Even though Estella has told Pip exactly what she thinks of him, Pip still hesitates to retaliate when asked by Miss Havisham for his thoughts and feelings of Estella, ‘”I don’t like to say,” I stammered’, he stammers as he is nervous and doesn’t want to offend Estella, this shows Pip’s respect for those of higher social class. But Miss Havisham makes Pip whisper what he thinks of Estella. He replies to Miss Havisham with two positive remarks and one negative. Pip describes Estella to be proud and pretty, he says these even though he has received nothing but insults from Estella throughout the day. Pip then goes on to describe Estella as insulting; when Pip makes this remark it is written that Miss Havisham looks at Pip with, ‘a look of supreme aversion ’, this means that she looked at Pip with the highest look of disgust and dislike.

Overall, the presentation of Estella behaviour here and elsewhere in the novel is very dismissive. She thinks she is better than him, that she has superiority over him, when really the irony is that she was born into a family whose parents killed and stole.