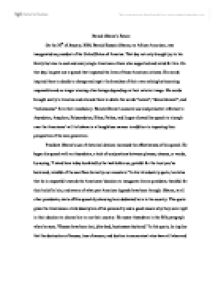 President Obamas use of rhetorical devices increased the effectiveness of his speech. He began his speech with an Asyndeton, a lack of conjunctions between phrases, clauses, or words, by saying, I stand here today humbled by the task before us, grat

Barack Obama's Future On the 20th of January, 2009, Barack Hussein Obama, an African American, was inaugurated as president of the United States of America. That day not only brought joy to his family but also to each and every single American citizen who supported and voted for him. On that day, he gave out a speech that impacted the lives of those American citizens. His words inspired them to decide to change and repair the breaches of their own making by becoming responsible and no longer viewing other beings depending on their exterior image. His words brought sanity to America and allowed them to delete the words "r****m", "demolishment", and "recklessness" from their vocabulary. Barack Obama's accurate use and persistent reference to Asyndeton, Anaphora, Polysyndeton, Ethos, Pathos, and Logos allowed his speech to triumph over the Americans' will to behave in a thoughtless manner in addition to impacting their perspective of the new generation. President Obama's use of rhetorical devices increased the effectiveness of his speech. He began his speech with an Asyndeton, a lack of conjunctions between phrases, clauses, or words, by saying, "I stand here today humbled by the task before us, grateful for the trust you've bestowed, mindful of the sacrifices borne by our ancestors." In his introductory quote, he states that he is respectful towards the Americans' decision to inaugurate him as president, thankful for their belief in him, and aware of what past American legends have been through. ...read more.

Obama reuses Anaphora in the seventh paragraph of his speech by saying, "They are serious and they are many. They will not be met easily or in a short span of time. But know this America: They will be met." The word "they" implies to the challenges America is facing, and Obama repeats that word in order to make it clear to the spectators that their view of those challenges as simple and easy to surpass is wrong. He claims that there are several challenges that must be thought about seriously, for they cannot be overcome effortlessly or quickly. He, however, promises the ignorant Americans that these obstacles and challenges shall be triumphed over. Obama's use of Anaphora allowed him to gain the spectators' attention, for the repetition of the words "our" and "they" brought a certain rhythm to the speech. That rhythm made the speech less boring and showed the audience that what Obama is trying to fulfill for them is certain. The third rhetorical device that Obama persistently used was Polysyndeton, which is the deliberate and excessive use of conjunctions between successive phrases, words, or clauses. He began to use Polysyndeton in the eleventh paragraph by saying, "struggled and sacrificed and worked." Obama is referring to the hard working men and women who have had to suffer for their country and endure several obstacles. ...read more.

His use of these three appeals allowed him to gain the Americans' awareness of their arrogant behavior. He used Logos to give the citizens a vivid description of the reality they are living in and his opinion on the causes of the conditions they are enduring. He used Ethos in order to discredit the Americans by blaming them for causing a great deal of disruption in their country. Finally, he used Pathos to show the Americans how ruthless and dictatorial the past had been so that they can compare their society now to the previous one. These examples of rhetorical devices, ethos, pathos, and logos showed the Americans that Obama truly has a gift in effectively pointing out his notion and that he deserves to be considered as president of the United States. He has given the Americans hope that one day their dream of a peaceful and well rounded country will be granted. He has left them touched because of his cunning use of rhetorical devices, for they truly impact one's interior and give out the message conveyed in a stylistic way. They gave his speech rhythm so as not to bore the audience and allowed him to express his view on America's reckless behavior. His speech deliberately changed every hearer's perspective of the future, for it consisted of a constantly calm and self-confident mood that brought joy to each and every single citizen in the United States of America. ?? ?? ?? ?? ...read more.