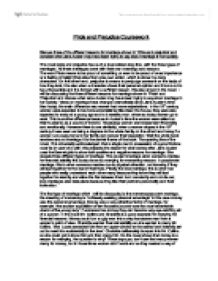 So we now know that one reason for marriage was money, there are two more in the book, one is the passionate marriage, this is a marriage based on physical attraction. A typical example of this is Mrs. Bennet and Mr. Bennet, it was not ideal. Mr. Bennet had married his wife because she was beautiful in at the time and her ability to supply him with children. Eventually though, her beauty faded and so did their enjoyment of each other. He enjoyed his time alone in his study where he could be away from his wife and daughters. Is Lydia's and Wickham's marriage a repeat of the Bennet's? Jane Austen uses Wickham to exploit the passionate marriage from his looks but the prudent marriage from his intelligence. In the novel we know that Wickham impressed Elizabeth at first with his charms but when his past is revealed of Georgina, he's not so charming, 'Mr. Wickham's chief objective was unquestionably my sister's fortune....but I cannot help supposing that the hope of revenging himself on me was a strong inducement. This madam is a faithful narrative of every event in which we have been concerned together'. Wickham tried to marry Georgina because he knew she had a large fortune but Darcy stopped him before they got married. So from this we know that all Wickham wants is money. Lydia is very passionate about Wickham, we know this because she elopes with him, 'My youngest sister has left all her friends-has eloped;-has thrown her self into the power of Mr. Wickham.' ...read more.

But in Jane Austen's novel she shows that Mr. Bingley really didn't like spending much of his free time with his wife, because all she would do is talk, talk and talk some more and that would drive Mr. Bennett insane. Looking at a passionate marriage in general it comes across as rather inviting as you don't really know how far you are going to get with someone it's like a mystery, but on the other hand it's a risk, you could loose everything. Finally Austen shows how rare it was in her society to have a perfect couple, the passionate marriage which is a balance of prudence and love, Austen shows this is the key to marriage as Darcy and Elizabeth have good understanding of each other. They seem to be the weakest characters in the novel and end up coming out the strongest as they married for love, they married because after all the disagreements that had made they finally saw through each issue and saw that they were compatible. Elizabeth and Darcy are likely to have a good marriage and not drift apart like the passionate and mercenary marriages that took place. Mr. Bennett and Mrs. Bennett show that later on in their marriage, their love for each other dies out. As a general over view on the love marriages that took place, I think that this is a good example to set for when people are getting married. Marry for love or don't marry at all, you'll only end up with a broken heart or a wrecked life. ...read more.