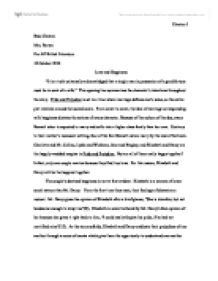 Bess Glanton Mrs. Brown Pre-AP British Literature 10 October 2010 Love and Happiness "It is a truth universally acknowledged that a single man in possession of a good fortune must be in want of a wife." This opening line summarizes the character's intentions throughout the story. Pride and Prejudice is set in a time where marriage defines one's value, so the entire plot revolves around the sacred union. From cover to cover, the idea of marriage corresponding with happiness dictates the actions of every character. Because of the culture of the day, every Bennett sister is expected to marry and settle into a higher class family than her own. Contrary to their mother's incessant nettling, four of the five Bennett sisters marry by the end of the book. ...read more.

Mr. Darcy gives his opinion of Elizabeth after a brief glance, "She is tolerable; but not handsome enough to tempt me"(8). Elizabeth is never bothered by Mr. Darcy's foul opinion of her because she gives it right back to him, "I could easily forgive his pride, if he had not mortified mine"(15). As the story unfolds, Elizabeth and Darcy eradicate their prejudices of one another through a series of events which give them the opportunity to understand one another and time to reconcile their feelings for each other. A transformation of feelings is evident when Darcy describes his change of heart, "But that was only when I first knew her, for it is many months since I have considered her as one of the handsomest women of my acquaintance"(229). ...read more.

Elizabeth said it best when she describes Darcy as ""the man who, in disposition and talents, would most suit her"(264). Their charismatic similarities are vast. Both Elizabeth and Darcy are bold, confident, and remain independent of society's expectations. The chemistry between them intensifies with every encounter in the story. It is so profound that the reader is glued to the pages waiting for the moment when they finally unite in marriage. In Pride and Prejudice, Elizabeth and Darcy turn love into an individual act rather than a social one. They ignore the laws of society and pursue their affections whole-heartedly. Elizabeth is quite convincing when she declares "There can be no doubt of that. It is settled between us already that we are to be the happiest couple in the world"(319). Because of the authentic friendship and effortless rapport that exist between the couple, their union is destined to be eternal. ...read more.