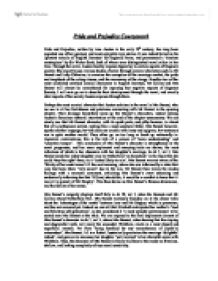 Pride and Prejudice Coursework Pride and Prejudice, written by Jane Austen in the early 19th century, has long been regarded one of her greatest, and most enjoyable love stories. It was indeed hailed as the 'greatest miracle of English literature' by Reginald Farrer, and pronounced a 'timeless masterpiece' by Sir Walter Scott, both of whom were distinguished novel critics in her time. Through the novel, Austen harshly exposes hypocrisy in certain aspects of Regency society. She expertly uses various shades of satire through comical characters such as Mr Bennet and Lady Catherine, to examine the corruption of the marriage market, the pride and ineptitude of the ruling classes, and the mercenary of the clergy. Possible two of the most celebrated satirised comical characters in English literature, Mr Collins and Mrs Bennet will always be remembered for exposing key negative aspects of Regency Society. I will now go on to describe their development through the novel, and exactly what aspects of her society Austen exposes through them. Perhaps the most comical character that Austen satirizes in the novel is Mrs Bennet, who we see in all her foolishness and petulance conversing with Mr Bennet in the opening chapter. Their dialogue beautifully sums up the Bennet's characters, indeed making Austen's ferocious authorial intervention at the end of the chapter unnecessary. We can clearly see that Mr Bennet character, with its quick parts, and pithy humour, is almost that of a professional satirist, making him a most unnatural father. ...read more.

I also feel that Austen is strongly criticizing the huge inequality between the sexes in Regency society. Through Mrs Bennet, she shows that the conditions of economic life in that period favoured men and restricted women. The entailed fortune that so obviously benefits Mr Collins and restricts Mrs Bennet is merely the epitome of an economic privilege granted of men and an economic restriction imposed on women. Men such as Wickham and Collins, no matter how hapless and undeserving, must be provided for and given every opportunity to earn their way. Women in contrast are prepared for nothing but display. Their goal is not to accomplish, but to 'be accomplished', or as Miss Bingley puts it, to be 'esteemed accomplished. Indeed the first two sentences of the novel make subtle and ironic point of this disparity. Here we see that men do not need to marry. They may 'want' or desire wives, but unlike women who need to marry to secure financial security, men can remain bachelors for the rest of their lives and still live in great comfort. We do indeed know from her letters to her sister Cassandra, that Jane Austen, who remained an unmarried maid until she died, was not in a good financial situation. Her family situation moreover, imposed upon her a heightened awareness of the economic contradictions between genteel men and women, for Austen had five brothers who had what she did not: access to work that paid, access to inheritance and privilege, and access to the status that belonged to being both prosperous and male. ...read more.

However, Austen criticises him most viciously in his second letter to the Bennets, where he condones Mr Bennet on Lydia's elopement. He tells Mr Bennet that 'the death of his daughter would have been a blessing in comparison' to her elopement. Although he is a man of religion, he still advises Mr Bennet to 'close the doors' on his daughter. Collins is wonderfully caricatured through his letters, which perfectly display his unfortunate pride and condescension. Through Mr Collins, Austen vindictively attacks the clergy of Regency society, criticising their mercenary, and unholy, unchristian qualities. We are also extremely disturbed to hear that, if Wickham had failed in the militia, he would 'have gone into the church'. The fact that this womaniser and drunkard should even consider becoming a clergyman is absolutely outrageous. I feel that, unlike with Mrs Bennet, Austen is strongly and nastily criticizing Mr Collins and the clergy of her time, using biting Juvenalean satire to convey her message to the reader. It is indeed 'a truth universally acknowledged' that the ebullience and confident assurance of its comedy, combined with its fairy tale gratifications, has made Pride and Prejudice the best known, and possibly the best liked, of all the Jane Austen novels. Initially called 'First Impressions', Pride and Prejudice brilliantly describes the fusion between upper class and bourgeoisie society. In it Austen flaunts beautifully her rare and uncanny ability to mock her characters exaggerated faults, and in doing so, criticize many aspects of the ostentatious and repressive world in which she lived. ...read more.