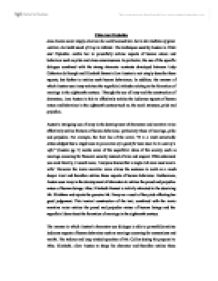 Pride And Prejudice Jane Austen never simply observes the world around her, but in the tradition of great satirists, she holds much of it up to ridicule. The techniques used by Austen in Pride and Prejudice, enable her to powerfully satirise aspects of human nature and behaviour such as pride and class consciousness. In particular, the use of the specific dialogue combined with the strong character contrasts developed between Lady Catherine de Bourgh and Elizabeth Bennet allow Austen to not simply describe these aspects, but further to satirise such human behaviours. In addition, the manner of which Austen uses irony satirises the superficial attitudes relating to the formation of marriage in the eighteenth century. Through the use of irony and the construction of characters, Jane Austen is able to effectively satirise the ludicrous aspects of human nature and behaviour in the eighteenth century such as, the social structure, pride and prejudice. Austen's intriguing use of irony in the development of characters and narrative voice effectively satirise features of human behaviour, particularly those of marriage, pride and prejudice. ...read more.

The tedious and long winded speeches of Mr. Collins during his proposal to Miss. Elizabeth, allow Austen to shape his character and therefore satirise these ridiculous aspects of human behaviour. For example, Mr. Collins makes idiotic and almost ridiculous statements such as, "As soon as I entered the house I singled you out as the companion of my future life."(Austen pg.103) This portrays his character as pompous and foolish and further satirises the obsequious behaviours of human beings - We find it humorous that Mr. Collins' idea of marriage is about, "...Situation[s] in life [and]... connections,"(Austen pg. 104) In addition, Austen is able to mock the superficial idea of marriage through the hysterical and exaggerated dialogue of Mrs. Bennet - "Oh Mr. Bennet...If I can but see one of my daughters happily settled at Netherfield, I shall have nothing more to wish for." (Austen pg.11) Hence she is portrayed as shallow and idiotic, enabling Austen to satirise the ideals of marriage in this period. Austen constructs the characters of Mrs. Bennet and Mr. Collins through their ludicrous dialogue and is therefore able to satirise the fact that marriage occurs for wealth and relations, not love. ...read more.

We see the events unfold from Elizabeth's perspective and therefore support her criticism of the idea that the lower-classes should not be associated with those of the upper class. By constructing the text from Elizabeth Bennet's point of view and then contrasting her with Lady Catherine de Bourgh, Austen is able to effectively mock the proud and class conscious society of the eighteenth century. As evident, Jane Austen has not simply described the world around her but has used techniques such as irony and character construction to powerfully ridicule aspects of human nature and behaviour in the eighteenth century. Through the contrast of conflicting characters and their specific dialogue, Austen is able to satirise the proud and class conscious nature of human beings and their idea that the function of marriage is to improve social status. In addition, Austen uses both an ironic narrative voice and irony in the development of characters to satirise the ridiculous and superficial behaviours of human beings. Through the use of irony and the construction of characters, Jane Austen is able to effectively satirise the ludicrous aspects of human nature and behaviour in the eighteenth century such as, the distinct social structure, pride and prejudice. ...read more.