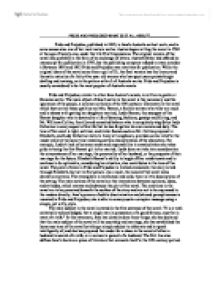 Pride and Prejudice - What Is It All About?

PRIDE AND PREJUDICE-WHAT IS IT ALL ABOUT?______________ Pride and Prejudice, published in 1813, is Jane's Austen's earliest work, and in some senses also one of her most mature works. Austen began writing the novel in 1796 at the age of twenty-one, under the title First Impressions. The original version of the novel was probably in the form of an exchange of letters. Austen's father had offered he manuscript for publication in 1797, but the publishing company refused to even consider it.Between 1810 and 1812 Pride and Prejudice was rewritten for publication. While the original ideas of the novel come from a girl of 21, the final version has the literary and thematic maturity of a thirty-five year old woman who has spent years painstakingly drafting and revising, as is the pattern with all of Austen's works. Pride and Prejudice is usually considered to be the most popular of Austen's novels. ...read more.

For example, Lydia's lack of common sense and responsibility is revealed when she takes pride in being the first Bennet girl to be married. Lydia does not take into consideration the circumstance of her marriage, the personality of her husband, or the prospects of their marriage for the future. Elizabeth Bennet's ability to laugh off her misfortunate and to continue to be optimistic, considering her situation, also contributes to the tone of the novel. The point of view in Pride and Prejudice is limited omniscient; the story is told through Elizabeth, but not in first person. As a result, the mood of the novel lacks dramatic emotions. The atmosphere is intellectual and cold; there is little descriptions of the setting. The main actions of the novel are the interactions between opinions, ideas, and attitudes, which weaves and advances the plot of the novel. ...read more.

The first line also defines Jane's book as a piece of literature that connects itself to the 18th century period. Pride and Prejudice is 18th century because of the emphasis on man in his social environment rather than in his individual conditions. The use of satire and wit, a common form of 18th century literature, also contributes to label the book as 18th century. However, because Jane Austen had allowed personal feelings of the characters to be expressed in her work, she can also be classified as Romantic. In the figure of Elizabeth, Jane Austen shows passion attempting to find a valid mode of existence in society. Passion and reasons also comes together in the novel to show that they are complementary of marriage. In Pride and Prejudice, Jane has denounced the elements of marriage and society that she found distasteful. These are the conclusions of her observation of the people in her world. However in her writing, Jane has also reflected her own enjoyment in life among these people with and without their faults. ...read more.