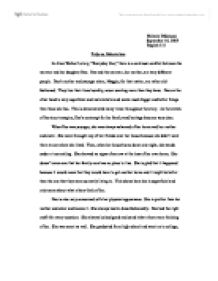 Melanie DiSciacca September 16, 2003 English 111 Pride vs. Materialism In Alice Walker's story, "Everyday Use," there is a continual conflict between the narrator and her daughter Dee. Dee and the narrator, her mother, are very different people. Dee's mother and younger sister, Maggie, for that matter, are rather old-fashioned. They live their lives humbly, never wanting more then they have. Dee on the other hand is very superficial and materialistic and wants much bigger and better things then those she has. This is demonstrated many times throughout the story. As the events of the story transpire, Dee's contempt for her family and heritage become very clear. When Dee was younger, she was always ashamed of her home and her mother and sister. She never brought any of her friends over her house because she didn't want them to see where she lived. Then, when her house burns down one night, she stands under a tree smiling. She showed no signs of sorrow at the loss of her own home. She doesn't even care that her family now has no place to live. She is glad that it happened because it would mean that they would have to get another home and it might be better then the one that they were currently living in. ...read more.

After the conversation about her name, Dee (Wangero) proceeds into the house. When she goes in she starts to find objects that she wants to take home with her so she can display them. She sees a churn and a dasher in the kitchen that she wants to take home. She says that she can "use the churn top as a centerpiece for the alcove table and think of something artistic to do with the dasher" (Walker 387). Dee only wants these items to show them and her newfound pride off. They don't really mean anything to her, even though they were made by family members. Not only does Dee want the churn and dasher, but she wants some quilts that were hand-sewn by her grandmother and aunt. Once again, Dee wants these items so she can show them off and make people think that she has an incredible amount of pride in her African heritage. When she takes the quilts, her mother tells her that she can't have them. She had promised to give them to Maggie when she gets married. Besides, Dee had been offered a quilt in the past and turned it down. ...read more.

At this time, African Americans were gaining status in society. There were many movements and uprisings to advance African's social position. Also, people with this heritage were changing their names and showing a tremendous amount of pride in their heritage. Dee's character fit into this perfectly. She wanted to fit in with what everyone else was doing and by going along with this group of people, she would fit in. She didn't really care about her past as much as she made people think that she did. Dee's pride led to much tension with her family. She was unable to communicate with her mother and sister because she was being sucked into society's idea of what she should be like, while her mother and sister were more traditional. They were content with living their lives how they were, even if there were better things out in the world. They were happy and that was all that mattered to them. Dee on the other hand was very insecure in herself and used society's ideals to form herself. Her mother and sister were happy with who they were, even if they didn't have a lot of money or expensive possessions. The things that they had were of more value to them then any new items, which showed that they had a greater sense of pride and security in who they were then Dee ever would. ...read more.