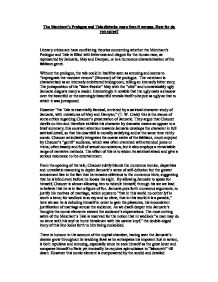 The Merchant's Prologue and Tale disturbs more than it amuses. How far do you agree? Literary critics are have conflicting theories concerning whether the Merchant's Prologue and Tale is filled with bitterness and disgust for the human race, as represented by Januarie, May and Damyan, or is a humorous characterisation of the fabliaux genre. Without the prologue, the tale could in itself be seen as amusing and seems to "impregnate the mordant venom" (Bronson) of the prologue. The merchant is characterised as an intensely embittered bridegroom, telling an intensely bitter story. The juxtaposition of the "faire fresshe" May with the "olde" and unmistakably ugly Januarie disgusts many a reader. Interestingly it notable that the ugly casts a shadow over the beautiful or the seemingly beautiful reveals itself to be just as ugly as that to which it was juxtaposed. However "the Tale is essentially farcical, enriched by a satirical character study of Januarie, with miniatures of May and Damyan," (T. W. Craik) this is the stance of some critics regarding Chaucer's presentation of Januarie. ...read more.

Januarie puts forth numerous arguments, to justify his motives of marriage, which equate to "that in this world no oother lyf is worth a bene; for wedlock is so esy and so clene, that in this world it is a paradis," here we see he is deluding himself in order to gain the pleasures, his inconsistent justification of marriage amuse the audience. As we dwell deeper into Januarie's thoughts the comic elements exceed the audience's expectations. The most cutting satire of the Merchant's Tale is reserved for the notion that in wedlock "a man may do no sinne with his wyf ne hurte himsleven with his owene knyf," the double-edged irony of this line looks forth to him being cuckolded. There is humour in the account of the nuptial chamber, having seen the Januarie's desires grow throughout he wedding feast as he anticipates his impotent l**t in action, is both repulsive and amusing, especially since he sees himself as the great lover and compares himself to Paris yet ironically he requires aphrodisiacs to "laboureth" till dawn. ...read more.

He is to embrace the tree, whilst she climbs on his back. She is treading on him physically and metaphorically into Damyan's arms, this is visually very strong as it is a sign of dominance or even victory. No matter how coarse and perverted Januarie's character has seemed, at this point inevitably, the audience are sympathetic towards the cuckolded husband. Januarie's character is amusing in itself and offers Chaucer opportunities of showing it off, putting the reader in good humour as well as giving the necessary facts. It is not so much the tale, which disturbs, as it is enriched with farcical irony and humour, but the prologue and the themes evoked, which disturb the reader. The lines on the creation of Eve imply that God made Eve not for God himself to love but out of pity for Adam. Furthermore, throughout the assumption is made that women were created to be servile and to assure her husband's comfort. Much more serious, is the negative approach to marriage, the Merchant's Tale backs neither the husband nor the wife but shows each abusing the other for his or her pleasure rejecting the idealistic concept of love in marriage. ?? ?? ?? ?? ...read more.