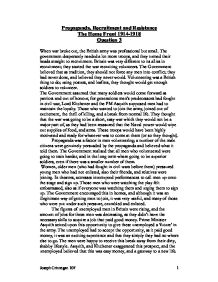 Propaganda, Recruitment and Resistance The Home Front 1914-1918 Question 3 When war broke out, the British army was professional but small. The government desperately needed a lot more troops, and they turned their heads straight to recruitment. Britain was very different to its allies in recruitment; they started the war recruiting volunteers. The Government believed that as tradition, they should not force any men into conflict; they had never done, and believed they never would. Volunteering was a British thing to do; using posters, and leaflets, they thought would get enough soldiers to volunteer. The Government assumed that many soldiers would come forward as patriots and out of honour, for generations men's predecessors had fought in civil war, Lord Kitchener and the PM Asquith supposed men had to maintain the loyalty. Those who wanted to join the army, joined out of excitement, the thrill of killing, and a break from normal life. They thought that the war was going to be a short, easy war which they would not be a major part of, as they had been reassured that the Naval power would wipe out supplies of food, and arms. These troops would have been highly motivated and ready for whatever was to come at them (or so they thought). Propaganda was a factor in men volunteering; a number of the male citizens were genuinely persuaded by the propaganda and believed what it told them. The Government realised that all men who volunteered were going to train harder, and in the long term where going to be superior soldiers, even if there was a smaller number of them. ...read more.

However by 1915 not enough soldiers were being recruited, and drastic measures hadto be taken to gather enough soldiers to compete with the large German army. In 1916 there was a change in Government. Lloyd George became the new Prime Minister, he was determined to win this war, and his practical mind led to the introduction of conscription. The Government primarily thought that they would recruit enough soldiers without moving to conscription, but they were very wrong. The German land forces were huge, and the previous Prime Minister (Asquith) believed this war would be won by Britain's naval supremacy. Again, they were wrong, the trenches was where the major fighting was taking place, thousands of deaths happened each day at the front. As the war dragged on and on, fewer and fewer amounts of men were enlisting to fight, this was mainly due to leaks from the front of the poor conditions, and high amount of deaths were published by the media. As the numbers of deaths on the front grew, the Government started to ban the lists of deaths. This was due to 'over the top' tactics' as men were old to walk in lines, shooting to gain breach the trenches of the German's. As the deaths increased men became more wary of what was really happening in the war, and some men began to see through the lies of propaganda. But deaths were not the only reason why men weren't signing up; the wages at home were increasing while unemployment was decreasing, resulting in men taking the chance of staying at home rather than fighting for the army, which at that time had very low pay. ...read more.

The newspaper's had much to do with bringing the country round to believing the Government, but the Government wanted everyone involved. In November 1917, the Ministry of National Service was formed; the power given to them was unbelievable. They could cancel all exemptions on occupational grounds; almost playing God with people's lives, as they well knew that 70% of these men would die or become seriously injured, before the war had ended. The government began to keep on rising the age limits, and the limits on who should fight, they were becoming desperate; the age limit was raised to 50, and if deaths were on high occurrence then it would be a staggering 56! Even Ireland was made to abide by the same rules of compulsion that was already in place in England. The British Army wanted to out number the Germans, but in the end they had a lot of soldiers at the front unwilling to fight, even those who had volunteered were becoming reluctant to fight. By the end of the war the British realised that they no longer needed so many men, as they were slowing crushing Germany, and the Minimum age of exemption was 23. Men under that age were considered too weak. Slowly but surely the Government extended the restrictions on compulsion. If there hadn't been a change in government then I believe compulsion would have been introduced at a much later stage, because Asquith was against the idea of forcing men to fight; it was a breach of civil rights. ?? ?? ?? ?? 1 Joseph Crinnegan 10F ...read more.