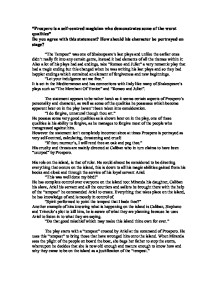 &quot;Prospero is a self-centred magician who demonstrates some of the worst qualities&quot; Do you agree with this statement? How should his character be portrayed on stage?

"Prospero is a self-centred magician who demonstrates some of the worst qualities" Do you agree with this statement? How should his character be portrayed on stage? "The Tempest" was one of Shakespeare's last plays and unlike the earlier ones didn't really fit into any certain genre, instead it had elements of all the themes within it: Also a lot of his plays had sad endings, take "Romeo and Juliet" a very romantic play that had a tragic ending but this changed when he was writing his last plays and so they had happier endings which contained an element of forgiveness and new beginnings. "Let your indulgence set me free." It is set in the Mediterranean and has connections with Italy like many of Shakespeare's plays such as "The Merchant Of Venice" and "Romeo and Juliet". The statement appears to be rather harsh as it seems certain aspects of Prospero's personality and character, as well as some of the qualities he possesses which become apparent later on in the play haven't been taken into consideration. "I do forgive, unnatural though thou art." He possess some very good qualities as is shown later on in the play, one of these qualities is his ability to forgive, as he manages to forgive most of the people who transgressed against him. However the statement isn't completely incorrect since at times Prospero is portrayed as very self-centred, calculating, threatening and cruel! ...read more.

"Woud't had been done. Thou didst prevent me - I had peopled else this isle with Caliban." Also Caliban is rather evil himself as he suggests Stephano and Trinculo should kill Prospero. "Revenge it on him - for I know thou dar'st." "where thou mayst knock a nail into his head." Revenge is a strong theme throughout the play as well as deception and disloyalty as is illustrated here. It could be said that this is just a result of how Prospero treats Caliban and that anyone in similar circumstances would feel the need for revenge, but he also makes plans for Miranda in his plot to overthrow Prospero: "Ay, Lord, she will become thy bed." Miranda, the person who treated him well and taught him how to speak. "took pains to make thee speak, taught thee each hour." If Caliban merely made this plan to overthrow Prospero due to a need for revenge surely he wouldn't choose to cause any harm to Miranda too? The relationship between Ariel and Prospero cannot be defined or described as either bad or good, as they have moments of affection for one another: "my fine spirit." "chick." At other times Prospero threatens Ariel and insults him. "if thou more murmur'st, I will rend an oak and peg thee in his knotty entrails." "malignant thing." ...read more.

"I say by sorcery he got this isle." They're plans go to waste because Prospero knows everything that happens on the island because Ariel his faithful servant tells him. Prospero's portrayal on stage should change in direct parallel to his change from a revenge seeking magician to a forgiving man. In the beginning his cloak should be highlighted as it is the source of his power along with his books and as the play gets closer to its conclusion the cloak should become less important and more of a background feature. In conclusion I feel the statement has been made rather rashly, without taking a thorough look at the character of Prospero. Admittedly Prospero can at first be to some degree described as a "self-centred magician" but this is not true throughout the play. As the evidence shows, he is only possessing of the worst traits when there is reason to be: being dumped on an island, the plots to overthrow him, Caliban's attempted rape and so on. It shows how bighearted he is that even after all that he is willing to forgive, even though many wouldn't be if in his shoes. Also at the time when his "enemy" Alonso was about to be assassinated by his own brother Prospero intervened, showing that he knows right form wrong. In the end Prospero is just a man with a passion for his books which led him to his misfortune but he manages to acquit himself by forgiving others and appealing to the audience in his final speech. ...read more.