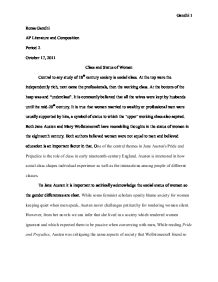 Published in 1792, twenty-one years before Pride and Prejudice, Mary Wollstonecraft's A Vindication of the Rights of Women is a radical argument for women's equality.

Roma Gandhi AP Literature and Composition Period 2 October 17, 2011 Class and Status of Women Central to any study of 18th century society is social class. At the top were the independently rich, next came the professionals, then the working class. At the bottom of the heap was and "underclass". It is commonly believed that all the wives were kept by husbands until the mid-20th century. It is true that women married to wealthy or professional men were usually supported by him, a symbol of status to which the 'upper' working class also aspired. Both Jane Austen and Mary Wollstonecraft have resembling thoughts in the status of women in the eighteenth century. Both authors believed women were not equal to men and believed education is an important factor in that. One of the central themes in Jane Austen's Pride and Prejudice is the role of class in early nineteenth-century England. Austen is interested in how social class shapes individual experience as well as the interactions among people of different classes. To Jane Austen it is important to satirically acknowledge the social status of women so the gender differences are clear. While some feminist scholars openly blame society for women keeping quiet when men speak, Austen never challenges patriarchy for rendering women silent. However, from her novels we can infer that she lived in a society which rendered women ignorant and which expected them to be passive when conversing with men. ...read more.

As it stands, Elizabeth can only attack him. She accuses Darcy of ruining her sister's chances with Bingley and of upsetting Wickham. Darcy does not understand what Elizabeth means and finds himself at a loss of words. When Elizabeth accuses him of ungentlemanly conduct, Darcy has heard enough, for he greatly prides himself on "his stately bearing," What stands in the way of Darcy and Elizabeth getting together at this point in the novel is "pride and prejudice." Darcy's pride makes him act in a superior way when he proposes; he indicates that he makes the offer in spite of her inferior social position and her vulgar family. Elizabeth's previously established prejudice against Darcy is intensified; she does not even contemplate marrying such an arrogant man. In an ironic inversion, Darcy accuses Elizabeth of being too proud, while Elizabeth accuses him of being prejudiced. She tells Darcy that he has a propensity to hate people and has shown his prejudice against Wickham and Jane. Whatever her intent may have been, conversation makes up an essential part in Jane Austen's novels. The type of conversation generally found among women raises awareness, amongst feminist scholars at least, of women's general ignorance during the time in which her novels were written and of the dire need for intelligent conversation among them. However, not everyone agreed with the view of womanhood presented the works of Mary Wollstonecraft and Jane Austen. ...read more.

Due to Mary Wollstonecraft's radical views, she thought marriage was should be based on common affection and respect, which was not possible unless husbands and wives were equals, both rational and educated. She believes that love would fade over times, and that only relationships based on friendships would remain tolerable into old age. Wollstonecraft is absolutely against traditional marriages based on convenience, or sentiment, where the husband patronizingly views his wife as a doll or toy for his enjoyment. "The mind must be strong that resolutely forms its own principles; for a kind of intellectual cowardice prevails which makes many men shrink from the task, or only do it by halves," (Wollstonecraft Chapter 1). Here Wollstonecraft is criticizing men for not following personal thoughts and judgments. She believes men refuse the instinct to form a moral judgment when told to do so. Jane Austen and Mary Wollstonecraft both share the idea that education is important to the nature of women. Both authors believe that education is absolutely essential for the complete development of any individual. All male and females have the same innate ability for reason. On the contrary, Mary Wollstonecraft feels marriage should solely rely on the nature of friendship between men and women while Jane Austen believes it should rely on love. The relationship between both authors is that Mary Wollstonecraft, even though written several decades before, have a more radical perspective on the societal and marital status of women than Jane Austen's more moderate views. ...read more.