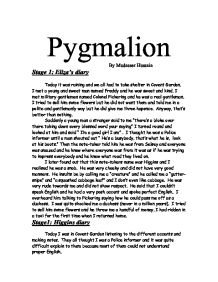 Pygmalion By Mudasser Hussain Stage 1: Eliza's diary Today it was raining and we all had to take shelter in Covent Garden. I met a young and sweet man named Freddy and he was sweet and kind. I met military gentlemen named Colonel Pickering and he was a real gentleman. I tried to sell him some flowers but he did not want them and told me in a polite and gentlemanly way but he did give me three hapence. Anyway, that's better than nothing. Suddenly a young man a stranger said to me "there's a bloke over there taking down every blessed word your saying" I turned round and looked at him and said " I'm a good girl I am" . I thought he was a Police informer until a man shouted out " He's a busybody, that's what he is, look at his boots." Then the note-taker told him he was from Selsey and everyone was amazed and he knew where everyone was from it was as if he was trying to impress everybody and he knew what road they lived on. I later found out that this note-takers name was Higgins and I realised he was a snob. He was very cheeky and did not have very good manners. He insults be by calling me a "creature" and he called me a "gutter-snipe" and "a squashed cabbage leaf" and I don't even like cabbage. ...read more.

I was quite impressed with Mr. Alfred Dolittle (dustbin man). He was quite happy with his money and in sent him on his way. Stage 3: Eliza's diary I went to see Higgins's mum today (sorry mother. There were guests at her house; there was sweet Freddy, Clara and her mother Mrs. Eynsford Hill. I was quite beautifully dressed no one hardly recognised me. According to Higgins I was talking the new "small talk" or new slang. That sweet Freddy seemed quite attracted to me and I was quite flattered by this. I did make a slip of the tongue because I said "b****y h**l". Higgins seemed slightly disappointed with me but I thought I did quite well for my first test. Stage 3: Higgins diary Today I took Eliza to my mothers' house. This was to try her out in society. I knew that the guests that were there elza had met before and I wanted to see if they recognised the transformation of Eliza and it seemed they were impressed. One thing that I realised today was that Eliza now knows how to speak but not what to say. Her grammar is incorrect and she uses her vocabulary as the subject matter of the street not as if she was talking in a high society. She uses an awful lot of slang words like "b****y" and "devil". ...read more.

Higgins does not see me as the "new" Eliza but as a "dirty flower girl" who has transformed due to his experiment. He thinks, " I am mutton dressed as lamb". The adult Higgins actions are the same as a child. Looking back I think I would have done it all again but a few minor adjustments. I would have seen what sort of person Higgins really is and see if would like to be part of his experiment. All in all it did not cost me anything and I have learnt to speak proper English and Higgins only gained money. (He won his bet won Colonel Pickering) Higgins' diary I think that if I had the chance to do it all again I probably would not. Eliza is too moody and cannot fit into high-class society. England is full of people who can't speak proper English I would have picked someone quieter and someone who does not complain as much. Eliza must like me for who I am and if she does not like it then tough. I find it very had to talk to people from the gutter because they don't understand them and I try explaining to them to learn proper English. This experiment has helped me gain confidence that I could pass anyone as a duchess. All in all I would not do it all again with Eliza I would pick someone more suitable. There is plenty of the "gutter snipe breed". ...read more.