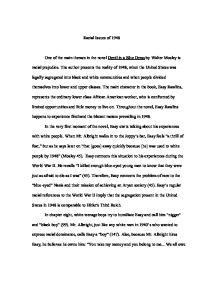 Racial Issues of 1948 One of the main themes in the novel Devil in a Blue Dress by Walter Mosley is racial prejudice. The author presents the reality of 1948, when the United States was legally segregated into black and white communities and when people divided themselves into lower and upper classes. The main character in the book, Easy Rawlins, represents the ordinary lower class African American worker, who is confronted by limited opportunities and little money to live on. Throughout the novel, Easy Rawlins happens to experience firsthand the blatant r****m prevailing in 1948. In the very first moment of the novel, Easy starts talking about his experiences with white people. When Mr. Albright walks in to the Joppy's bar, Easy feels "a thrill of fear," but as he says later on "that [goes] away quickly because [he] was used to white people by 1948" (Mosley 45). ...read more.

That's capitalism" (147-148). Albright uses racial terms pretty easily, and because Easy happens to be a black man who needs the job he needs to deal with it. Expressions of r****m in Devil in a Blue Dress go further than just a language. Another example for that is Mr. Carter's attitude toward Easy. As Easy says, Mr. Carter shows "the worst kind of r****m" by treating Easy like an equal (166). Mr. Carter, as Easy explains in the novel, does not recognize the racial difference between the two of them. Mr. Carter behaves as if Easy was less than a human being: "Mr. Todd Carter was so rich that he didn't even consider me in human terms." (166). Furthermore, all of the experiences that Easy happens to have with the police describe the relations between the upper and lower classes in 1948. The two policemen, Mason and Miller seem to get some kind of satisfaction from degrading lower class black men they arrest because it is their way of stating their racial dominance. ...read more.

Therefore, through Easy's interactions with Benny, Mosley suggests that race is not simply a matter of skin color. Easy learns many lessons throughout the book. He talks about how "Jews back then understood the American n***o" since "in Europe the Jew had been a n***o for more than a thousand years"(185). Easy feels connected to the two Jews, Abe and Johnny because they as Holocaust survivors are probably even more familiar with r****m than he is. Also, comparison of Jews and n*****s in the novel indicates how deep racial tensions were at the time. Devil in a Blue Dress is a great novel, because it is much more than just a detective story. Easy's experiences and struggles throughout the book have a great meaning and at the same time give the reader an understanding of 1940's Los Angeles, and the r****m and prejudice that hang over the black community at the time. Mosley illustrates in the novel a r****t society, with a privileged upper class on the top and determined to stay there. ...read more.

This is an interesting essay to read and the writer clearly understands the many aspects of racism in 1940s America. PEA used effectively throughout and some perceptive analysis.