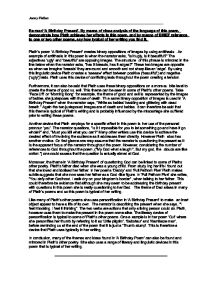 Re-read 'A Birthday Present'. By means of close analysis of the language of this poem, demonstrate how Plath achieves her effects in this poem, and by means of BRIEF reference to one or two other poems, say how typical of her writing you find it.

Re-read 'A Birthday Present'. By means of close analysis of the language of this poem, demonstrate how Plath achieves her effects in this poem, and by means of BRIEF reference to one or two other poems, say how typical of her writing you find it. Plath's poem 'A Birthday Present' creates binary oppositions of images by using antithesis. An example of antithesis in this poem is when the narrator asks, "is it ugly, is it beautiful?" The adjectives 'ugly' and 'beautiful' are opposing images. The structure of this phrase is mirrored in the line below when the narrator asks, "has it breasts, has it edges?" These two images are opposite as when we imagine 'breasts' they are round and smooth and not sharp like an 'edge'. ...read more.

Another device that Plath employs for a specific effect in this poem is her use of the personal pronoun 'you'. The narrator questions, "Is it impossible for you to let something go and have it go whole?" and, "Must you kill what you can?" Many other writers use this device to achieve the desired effect of involving the audience as it addresses them directly. However Plath also has another motive. On first glance one may assume that the narrator is questioning the present as it is the apparent focus of the narrator throughout the poem. However, considering the number of references to God throughout the poem, ("My God what a laugh!", But my god, the clouds are like cotton.") one could assess that the question is actually aimed at God. ...read more.

The narrator is describing the present when she says, "I feel it looking. I feel it thinking". The two verbs are actions that only a living person could do. Plath, however uses them to make the present in the poem come alive. The literary device of personification is typical to some of Plath's other poems. One example is in her poem 'Cut' where she personifies her thumb by referring to it as 'Little pilgrim', 'Saboteur' and 'Kamikaze man', before reminding us at the end of the poem that it is just a 'Thumb stump'. This is therefore a device that Plath uses typically in her writing. In conclusion, many of the themes and ideas found in 'A Birthday Poem' can also be found and mirrored in Plath's other poetry. She also uses a range of literary and linguistic devices in this poem that is typical of her writing. Jenny Patten ...read more.