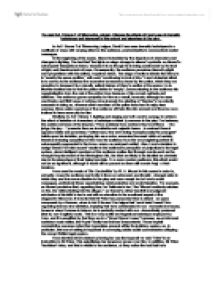 Re-read Act 1 Scene 7 of Murmuring Judges. Discuss the effects of Hare's use of dramatic techniques and stagecraft in this extract and elsewhere in the play.

Re-read Act 1 Scene 7 of 'Murmuring Judges'. Discuss the effects of Hare's use of dramatic techniques and stagecraft in this extract and elsewhere in the play. In Act 1 Scene 7 of 'Murmuring Judges, David Hare uses dramatic techniques in a multitude of ways with varying effect on the audience, predominantly to communicate social messages. At the beginning of the scene, Gerard is isolated by the departure of characters and changes in lighting. The fact that "the lights on stage change in silence" symbolises Gerard's subsequent inauspicious future, because it is as though he is being condemned by the lack of light, and therefore lack of hope. Consequently, the audience perceives Gerard's plight and sympathises with his solitary, hopeless status. The stage directions dictate that Barry is in "exactly the same position," with work "overflowing in front of him." Hare's intended effect is to convey to the audience the excessive bureaucracy faced by the police, which they are receptive to because it is a visually salient feature of Barry's section of the scene. ...read more.

presents them as formidable and majestic hence, in contrast Gerard appears feeble and powerless. Furthermore, Gerard's being "conspicuously the youngest" builds upon his isolation, portraying him as a naive, somewhat innocent victim of society, therefore inducing sympathy for him from the audience from the very beginning (which is subsequently augmented in the focus scene, as analysed earlier). Also, Hare's decision to assign Gerard "an Irish accent" results in the audience's perception of prejudices in the legal system, since intelligent members of the audience realise that through events such as the wrongful imprisonment of the Birmingham Six, the Irish are likely to be labelled as criminals due to the stereotype of their being terrorists. To a more modern audience, this effect would not be as significant, although it would still be present as there still remain Anglo-Irish tensions. Hare uses the music of 'Die Zauberfl�te' by W. ...read more.

These implicit contradictive nuances reflect the hypocrisies present within the judiciary system, so, in particular, this use of setting is important in conveying subtle social commentaries critiquing the corrupt British legal system. Hare elevates Irina's status by having her use the imperative verb "Take" in an instruction to Sir Peter. This establishes her temporary power over him. In addition, Sir Peter "hesitates" twice, and this is visible to the audience, so they notice the fact that he is rendered very uncomfortable to Irina's subversion of traditional patriarchal power dynamics. Both the 1990's and contemporary audiences notice this as gender inequality is still present today. In Act 2 Scene 8, a split stage is also used, indicating that there is misunderstanding and convoluted miscommunication between the legal institutions, since the speech merges together in dissonance, reflecting disharmony between public, the police and the judiciary, one of the main ideas Hare sought to convey through 'Murmuring Judges'. ...read more.