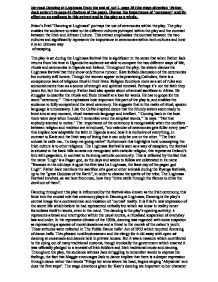 Re-read Dancing at Lughnasa from the end of Act 1, page 38 (the stage direction Father Jack enters) to page 42 (bottom of the page). Discuss the importance of ceremony and its effect on an audience in this extract and in the

Re-read Dancing at Lughnasa from the end of Act 1, page 38 (the stage direction 'Father Jack enters') to page 42 (bottom of the page). Discuss the importance of 'ceremony' and its effect on an audience in this extract and in the play as a whole. Brian's Friel "Dancing at Lughnasa" portrays the use of ceremonies within the play. The play enables the audience to relate to the different cultures portrayed within the play and the contrast between the Irish and African Culture. This extract emphasises the contrast between the two cultures and significantly represents the importance in ceremonies within both cultures and how it is an ultimate way of escaping. The play is set during the Lughnasa festival this is significant in the sense that when Father Jack returns from his time in Uganda the audience are able to compare the two different ways of life, rituals and ceremonies in Uganda and Ireland. Throughout the play, the sisters discuss the Lughnasa festival that they know only from a rumour. Kate forbids discussion of the ceremonies but curiosity still hovers. ...read more.

Father Jack mentions the sacrifice of a goat or other animals during the Ryanga festivals, up to the "great Goddess of the Earth", in order to cleanse the spirits of the tribe. The Lughnasa Festival involves, as we hear from rose, how they "drive cattle through the flames to drive the devil out of them". Dancing throughout this play is influenced by the festival also known as the Irish ceremony, this links into the crucial role that ceremony plays in Dancing at Lughnasa, Dancing is the play's central image for a contravention and violation of 'normal' reality. It is Friel's new expression of the secret life which before he had represented verbally but which we know in reality never formulates itself in words, even in the mind. The dancing is the play's opening activity; it represents a break and interruption within the usual routine, a ritualised suspension of everyday law and order. In the repressive climate of the 1930s, dancing was regarded with some suspicion as representing a species of moral decadence and a threat to the morals of the nation's youth. ...read more.

And so, like the Sweeney boy, Jack has 'gone native', attracted by ancient ritual and wordless ceremony. Jack's fall from Christian orthodoxy is synonymous with his loss of language "my vocabulary has deserted me", In Uganda 'women are eager to have love children', Jack informs a horrified Kate, this emphasises how different the two cultures are as in Ireland this is highly frowned upon. Ceremony plays a crucial part in the play, it effectively enables the audience to relate to the characters in the mundy household and also portrays how enclosed they are in their own beliefs it also creates sympathy for Father Jack as he is lost in translation. The ceremony in Uganda and the Lughnasa Festival emphasise how different the Irish and African cultures are and how they live in a relatively isolated rural community. Furthermore it also highlights the role that dancing plays in their lives and how it in other words can take over when language fails. The ceremony in fact involves the audience in 'two juxtaposed worlds: that of tribal Uganda with its own rhythms and ceremonies and rural Ireland clinging in folk memory to the vestiges of the pagan rites which are being stifled by the conventions of the 1930's catholic society. ...read more.