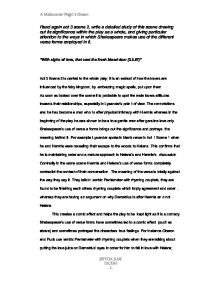 Read again act 3 scene 2, write a detailed study of this scene drawing out its significance within the play as a whole, and giving particular attention to the ways in which Shakespeare makes use of the different verse forms employed in it.

Read again act 3 scene 2, write a detailed study of this scene drawing out its significance within the play as a whole, and giving particular attention to the ways in which Shakespeare makes use of the different verse forms employed in it. "With sighs of love, that cost the fresh blood dear (3.2.97)" Act 3 Scene 2 is central to the whole play; it is an extract of how the lovers are influenced by the fairy kingdom, by embracing magic spells, put upon them. As soon as looked over the scene it is probable to spot the male lovers attitudes towards their relationships, especially in Lysander's point of view. The connotations are; he has become a man who is after physical intimacy with Hermia whereas in the beginning of the play he was shown to be a true gentleman after genuine love only. Shakespeare's use of verse a forms brings out the significance and portrays the meaning behind it. For example Lysander spoke in blank verse in Act 1 Scene 1 when he and Hermia were revealing their escape to the woods to Helena. This confirms that he is maintaining order and a mature approach to Helena's and Hermia's discussion. Contrarily in the same scene Hermia and Helena's use of verse forms completely contradict the context of their conversation. The meaning of the verse is totally against the way they say it. They talk in Iambic Pentameter with rhyming couplets, they are found to be finishing each others rhyming couplets which imply agreement and order, whereas they are having an argument on why Demetrius is after Hermia and not Helena. ...read more.

However nice and resolved this concept seems, yet there is more confusion. Lysander is also under a spell which leaves both the men madly in love with Helena. Nonetheless in the woods he starts talking in Iambic Pentameter which has connotations of immaturity and s****l desire. He seems like a spontaneous man, who is following his feelings. This gives both Hermia and Helena a chance to be wooed and loved by both of the men: Hermia, before the spell where both Lysander and Demetrius wanted to marry her as Egeus (Hermia's father) arranged for her to marry a suitor, and Helena afterwards, when Puck accidentally put a spell on both the men's eyes. This idea conjures up a lot of similarities and differences between the two girls, within the play some of which are; how they both at one point of the play, don't trust each other as the following quote from Hermia shows. " ..Have you stolen my loves heart from him...? (Act 3 scene 2 verse 283)" However their differences are also revealed as Hermia is quick to blame Helena for Lysander's fickleness. Whereas Helena was jealous of Demetrius' love towards Hermia but never blamed her. Shakespeare uses Iambic Pentameter with rhyming couplets when Helena is mentioning her jealousy of Demetrius' love towards her friend Hermia which manages to create a laid back, friendly and more comic effect whereas when Hermia uses blank verse when she is accusing Helena of Lysander's fickleness which entails Hermia's anger and frustration. ...read more.

Shakespeare uses blank verse to mark the significance of the conversations within the characters. However Shakespeare also uses Iambic Pentameter with rhyming couplets to illustrate understanding and order in the renaissance audience's to give it a light and comic effect. Shakespeare also presents similarities and differences between the male and female lovers within the play using imagery, emphasizing the points made within the act. **** The play ends with all the problems resolved except one; Demetrius is still under a spell. However both girls get what they want and marry their lovers Hermia marries Lysander and Helena marries Demetrius. The fairy kingdom is also sorted and problems resolved it is where the lovers are united and where Titania and Oberon resolve their problems and reunite. The mechanicals also get to show their production to the upper class and are proud of themselves. "Even in this one plot Shakespeare has created different layers- Roman and Romantic; in the recipe to comedy" ii Act 3 scene 2 is central to the whole play and this matter makes it the most significant scene within the play. The lovers, the mechanicals and the fairy kingdom, play a part in this. The significance of this scene and the impression it has on the whole of the play is achieved by Shakespeare's use of verse forms and the dramatic impact these have on the act, which also have an effect on the play which results in having an effect on the whole of the play. ...read more.