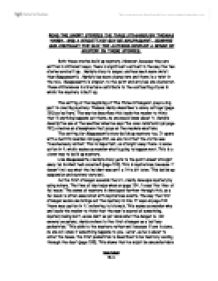 Read the Short Stories the Three Strangers By Thomas Hardy, and a Vendetta By Guy De Maupassant. Compare and Contrast the Way the Authors Develop a Sense of Mystery In These Stories.

READ THE SHORT STORIES THE THREE STRANGERS BY THOMAS HARDY, AND A VENDETTA BY GUY DE MAUPASSANT. COMPARE AND CONTRAST THE WAY THE AUTHORS DEVELOP A SENSE OF MYSTERY IN THESE STORIES. Both these stories build up mystery. However, because they are written in different ways, there is significant contrast in the way the two stories are built up. Hardy's story is longer, and has much more detail than Maupassant's. Hardy's has more characters and there is a twist in the tale. Maupassant's is simpler, to the point and only has one character. These differences in structure contribute to the contrasting styles in which the mystery is built up. The setting at the beginning of 'The Three Strangers', plays a big part in creating mystery. Thomas Hardy describes 'a lonely cottage' (page 130) as 'solitary'. The way he describes this leads the reader to think that if anything happens out there, no one would know about it. Hardy's descriptive use of the weather when he says 'the level rainstorm' (on page 131), creates an atmosphere that plays on the readers emotions. The setting for Maupassant's story builds up mystery too. It opens with a horrific murder. ...read more.

However, it says that she had a 'sudden inspiration' (page 202). This tells you that the woman is not a gentle, soft woman, or not in this case, at least. This is because she is so determined to do what she has to do, since it is what she has believed in throughout her whole life. Page 202 also says that the inspiration was a 'fierce vindictive' one. The woman had forced herself to be less shy and timid, especially to be able to carry out the vendetta on her son's behalf. This builds up mystery well, as it means that the woman could be unpredictable as she is not her usual self. Hardy also uses this method in his story. He does not disclose to us the next mystery that is about to arise. The mystery is what the second stranger does for a living. There are clues scattered about when he talks. For example, on page 138, it says 'not a face without power.' This gives the impression, that at least he is a boss of some kind or in charge of something. He was in fact, in charge of something, that thing being other peoples' lives. ...read more.

Hardy used it as in the isolation of the little cottage, whereas, Maupassant used it as in the isolation of the widow. On page 201, it says the widow 'refused to let anyone stay.' The authors are building up mystery in the same way, but in a different context. I can now say that I immensely enjoyed reading both of these stories. They had both contrasts and comparisons, but more contrasts. The two stories built up mystery very well, but they built it up in completely different ways. I think this is because both authors were not setting out to write the same kind of story. I personally preferred Hardy's story. I think this is because it built up mystery in a very shrewd way so that I was guessing what the answer would be right until the very end. One part that I did enjoy greatly, however, was the red herring. I found this to be a very clever way of putting readers off course from the real answer, as it did to me. I did enjoy Maupassant's story as well, but I didn't find it as mysterious as Hardy's. In conclusion, I would like to say that I think both stories built up mystery well, but I think Hardy's built it up to a greater effect. Dale Caffull 11 - 4 ...read more.