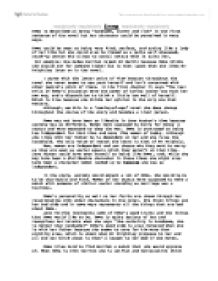 readslowly readslowly Emma readslowly readslowly Emma is described as being "handsome, clever and rich" in the first sentence of the novel but her character could be perceived in many ways. Emma could be seen as being very kind, perfect, and acting like a lady of her time but she could also be viewed as a quite self-obsessed, stuck-up person who clings to social stAtus when it suits her, For example: She makes Harriet reject Mr Martin because Emma thinks she should aim for someone higher but is then upset when she likes Mr Knightley later on in the novel. I agree with the latter point of view because throughout the novel she never seems to see past herself and isn't concerned with other people's point of views. In the first chapter it says "The real evils of Emma's situation were the power of having rather too much her own way, and a disposition to think a little too well of herself. ...read more.

Jane Austen could have seen herself as being like Emma, and, while she may have been a dislikeable character in those times she might also have been a character women looked up to because she was so independent. In the story, society would expect a lot of Emma. She would have to be charitable and kind. Women of her status were supposed to make a match with someone of similar social standing as marriage was a business. Emma's personality as well as her faults are shown through her relationships with other characters in the novel. Mrs Elton brings out her bad side and in some ways represents all the things that are bad about Emma. Jane Fairfax represents some of Emma's good traits and the things that Emma would like to be. Emma is quite jealous of her and recognises her talents when she says "She certainly is handsome, she is better than handsome!" ...read more.

i.e. when Emma insults Miss Bates on Box Hill none of the other characters are seen to comment and only Emma's point of view is given. Some of the characters are too farcical and could be compared to fairytale characters in some ways for example: Mr Knightley is like a virtuous prince charming that always does the right thing and Jane Fairfax is like a perfect little princess. Jane Austen chooses a traditional happy ending for the novel because people would expect to have one at the time she was writing it but, today people want something different and it is up to the author how to end the novel. Overall, she begins the novel very stuck-up and snobbish believing that she is more important than everybody else but as she approaches her twenty1st birthday and the age at which she has to take responsibility for herself she begins to change ...read more.