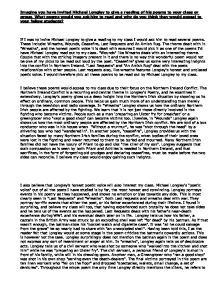 Reasons why I would invite Michael Longley to speak to my class.

Imagine you have invited Michael Longley to give a reading of his poems to your class or group. What poems would you ask him to read and why do you think they would appeal to your fellow students? If I was to invite Michael Longley to give a reading to my class I would ask him to read several poems. These include: Wreaths, Wounds, Ceasefire, Last Requests and An Amish Rug. The theme dealt with in "Wreaths", and the honest poetic voice it is dealt with ensures I would pick it as one of the poems I'd have Michael Longley read out to my class. "Wounds" like Wreaths deals with an interesting theme. Couple that with the striking imagery present in it and there is no way this wonderful poem would not be one of my picks to be read out loud by the poet. "Ceasefire" gives us some very interesting insights into the conflict in Northern Ireland. "Last Requests" and "An Amish Rug" deal with the poets relationships with other people. Last requests also, like wreaths features Longley's honest and unbiased poetic voice. I would therefore pick all these poems to be read out by Michael Longley to my class. I believe these poems would appeal to my class due to their focus on the Northern Ireland Conflict. The Northern Ireland Conflict is a recurring and central theme in Longley's Poetry, and he examines it extensively. ...read more.

Another man, a Greengrocer who "ran a good shop" was shot in his own shop "serving even the death-dealers". The final victims portrayed in this poem are ten linen workers who "fell on the floor" and dropped "spectacles, wallets, small change, a set of dentures". Throughout the whole poem the only time Longley directly mentions the killers, he refers to them as "death-dealers". This is another example of Longley not taking sides, and telling it as it happened. He does not call the killers, murderers or anything else that would indicate his disapproval of them, yet he does not call them warriors or heroes, which would suggest his approval of them. He simply refers to them as "death-dealers", almost as if it was a normal job for someone to have. This is another insight to be gained from reading Longley's poem, and I believe it would appeal to my class. Another reason I like the poetry of Michael Longley is because of its imagery. In his poetry Longley uses imagery which suddenly and forcefully conjure images in our minds of the events of his poetry, a subtle and clever way to engage us in and help us understand his poetry. In "Wounds" Longley describes the dead bodies of those at war. By mentioning an almost insulting part of the dead bodies, "a landscape of dead b******s" Longley seems to be almost crossing the line of decency. ...read more.

He admits he "Couldn't reach you through the oxygen tent", the oxygen tent is another symbol of their separation. Longley loves his father seems to have failed to communicate with him, a bit like Gar in "Philadelphia, Here I Come!" from my comparative course. We see another relationship revealed in "An Amish Rug". This poem is a love poem to his wife. Here he explores the relationship with his wife and shows the depth of their love - he shows how they are united in marriage, with the declaration that 'We shall step over it (the Amish rug) as over a flowerbed'. I very much enjoyed Longley's poems. While I liked their theme, I was most impressed by the way he told the poems using his honest, poetic voice. I believe Inviting him to read out his poems in persons to my class would only add to this effect, something I would dearly like to see. I believe the poems I have picked are Longley's most interesting poems, and the ones that show off his extensive skills the best. I believe that the imagery in his poems can only get more striking and clear if read out loud by him. I think my class would therefore truly enjoy that, and benefit from it hugely as well. I believe having Michael Longley read out these poems would make for a truly enjoyable event from which my class will be able to benefit and most importantly enjoy. ...read more.