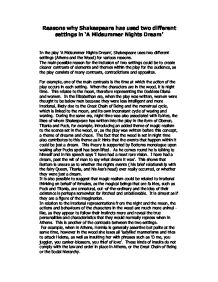 Reasons why Shakespeare has used two different settings in 'A Midsummer Nights Dream' In the play 'A Midsummer Nights Dream', Shakespeare uses two different settings (Athens and the Wood) for various reasons. The main possible reason for the inclusion of two settings could be to create clearer contrasts of elements and themes within the play for the audience, as the play consists of many contrasts, contradictions and opposites. For example, one of the main contrasts is the time at which the action of the play occurs in each setting. When the characters are in the wood, it is night time. This relates to the moon, therefore representing the Goddess Diana and women. In the Elizabethan era, when the play was written, women were thought to be below men because they were less intelligent and more irrational, likely due to the Great Chain of Being and the menstrual cycle, which is linked to the moon, and its own inconstant cycle of waxing and waning. During the same era, night time was also associated with fairies, the likes of whom Shakespeare has written into the play in the form of Oberon, Titania and Puck, for example, introducing an added theme of magic realism to the scenes set in the wood, or, as the play was written before this concept, a theme of dreams and chaos. ...read more.

This shows that Helena's feelings for Demetrius are so strong that she is even willing to let him use and treat her as his dog. However, Helena only expresses her feelings in this way in the wood, as in Athens, like Hermia, she is upholding a more civilised and ladylike persona. Because the characters are not holding back their emotions, this could show that they are following their instincts and in a way acting more irrationally, like animals, meaning they are lower down in the social hierarchy or Great Chain of Being than they would normally be. This is because they are acting like they are below their original status, for example, the males, who are usually logical and intelligent are becoming irrational and acting upon emotion, likening them to women and bringing them down by a social level in the Elizabethan Hierarchy. l**t and passion are highlighted more in the scenes set in the wood as apposed to the more gentle, somewhat rational feelings of true love, which actually shows a contrast within the wood itself, as apposed to a contrast between the wood and Athens, as the characters feel that they love one another, but pursue their l**t and passion as a way of expressing it. Referring back to the social hierarchy, it is possible to suggest that it imposes many restrictions for the characters when in Athens, not ...read more.

The 'Yin and Yang' element is also shown at the end of the play when Oberon, Titania and the rest of the fairies enter Athens to give their blessings. This shows the two settings, each of extreme opposites, merging together into one. This is also portrayed by Theseus and Hippolyta hunting in the woods at the end of the play. The language spoken by Oberon and Titania whilst in Athens consists of rhyming couplets. This brings an element of the wood into Athens, just as the lovers running away brought an element of Athens into the wood. This displays a 'Yin and Yang' style mix. Shakespeare could be suggesting that everyone in real life is the same, also. We all have a reasonable side combined with a 'wild, emotional side', but because of our society, in any era, aspects of that side of our personalities must be repressed or hidden in order to prevent chaos; however, if we didn't have these aspects, we wouldn't really be human. Also, if we are not allowed to express our 'wild side', at least once in a while, there could be negative consequences. Shakespeare communicates this idea or concept to the audience effectively through the two settings of Athens and the Wood and also the characters in the play that link them together. ...read more.