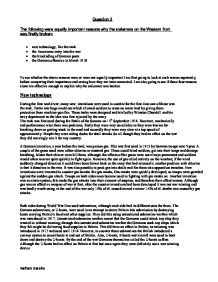 Reasons why the satalemate broke

The following were equally important reasons why the stalemate on the Western front was finally broken: * new technology, like the tank * the Americans entry into the war * the blockading of German ports * the German offensive in March 1918 To see whether the above reasons were or were not equally important I am first going to look at each reason separately, before comparing their importance and seeing how they are inter-connected. I am also going to see if these four reasons alone are effective enough to explain why the stalemate was broken. New technology During the first world war, many new inventions were used in combat for the first time one of these was the tank, Tanks was huge machines which allowed soldiers to cross no mans land by giving them protection from machine-gun fire. These tanks were designed and trialled by Winston Churchill and his navy department as the idea was first rejected by the army. The tank was first used during the Battle of the Somme on 15th September 1916. However, mechanically and performance wise there was problems, firstly they were very un-reliable as they were known for breaking down or getting stuck in the mud and secondly they were very slow at a top speed of approximately 10mph they were sitting ducks for shell attacks. So all though they had an effect on the war they did not singly win it for any country. ...read more.

Also, counter inventions were often developed to reduce the amount of effect the technology had but was still a significant reason for the stalemate being broken, as later on in the war these new inventions enabled the Germans with the power to get out of there trenches for the German offensive in march 1918. The American entry into the war At the beginning of 1917 the USA was still a neutral country, many times they were asked to ally with other countries but stuck to given out loans of money and weapons as all the Americans wanted was peace and democracy. When the Americans did finally join the war though was because of two main reasons: 1. The unrestricted submarine warfare used to destroy American ships 2. The Zimmerman Telegram, which stated that if Mexico entered war with America the Germans would help Mexico to re-conquer Texas, New Mexico and Arizona. This telegram was decoded by the British and sent to the Americans. Because of these reasons America declared war on Germany in April 1917. The Americans come into the war finally at around the same time that Russia pulled out because of this Germany was able to use all their troops at the western front. At the time America entered the war, they had the biggest economy in the world, and this lowered the spirits and damaged morale of the Germans. I think this was a significant reason for the stalemate being broken because the fresh American troops were able to hold off and push ...read more.

Between may and august no further advances were made and the Germans were now facing Aircraft, tanks and improved artillery as well as the well fed and well equipped troops of the British, French and Americans. On the 8th august the allies were able to make good progress and counter-attacked along most of the western front and by late September they had pushed the Germans all the way back to the "Hindenburg line" and the Germans finally gave in on the 11th November 1918, the Great War was over. This was one of the most significant reasons for the stalemate breaking as the Germans eventually got took down by the bigger and fresher army of the 3 allied countries French, British and Americans(it gave the allies the opportunity to attack they needed). Conclusion The causes for the stalemate being broken are interconnected. For example, without the blockade there might not have been the need for the Germans to have to go all out, without the entry of America to the war the French and British might not have been able to push the Germans back and force surrender and finally if there wasn't any new technology the Germans might not have had the power to get out of there trenches and try the "Ludendorff offensive". In conclusion I do think each reason was equally important as without one another might have never happened but if I had to choose the reason that I think was the most important it would be the blockading as it weakened the Germans and forced them to go all out with the German offensive. Question 3 Nathan Sarahs ...read more.