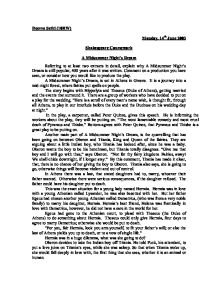 Referring to at least two extracts in detail, explain why A Midsummer Night's Dream is still popular, 400 years after it was written. Comment on a production you have seen, or consider how you would like to produce the play.

Deevya Sethi (10RW) Monday, 14th June 2003 Shakespeare Coursework A Midsummer Night's Dream Referring to at least two extracts in detail, explain why A Midsummer Night's Dream is still popular, 400 years after it was written. Comment on a production you have seen, or consider how you would like to produce the play. A Midsummer Night's Dream, is set in Athens in Greece. It is a journey into a mid-night forest, where fairies put spells on people. The story begins with Hippolyta and Theseus (Duke of Athens), getting married and the events that surround it. There are a group of workers who have decided to put on a play for the wedding. "Here is a scroll of every man's name wish, is thought fit, through all Athens, to play in our interlude before the Duke and the Duchess on his wedding-day at night." In the play, a carpenter, called Peter Quince, gives this speech. He is informing the workers about the play, they will be putting on. "The most lamentable comedy and most cruel death of Pyramus and Thisbe." Bottom agrees with Peter Quince, that Pyramus and Thisbe is a great play to be putting on. Another main part of A Midsummer Night's Dream, is the quarrelling that has been going on between Oberon and Titania, King and Queen of the fairies. ...read more.

Although used in modern French and German. (tu and du). Pronunciation has also changed a great deal, instead of taking the first letter of a word and replacing it with an apostrophe. The third letter is taken out instead. 'It is - tis' - nowadays 'it is - becomes it's.' Shakespeare's language has a big impact, on his plays because the English now is very different. These are words in his plays, which mean something, totally different in modern English. 'Civil - smooth, rude - rough, bolt - arrow, maiden - virginal.' These words are called 'false friends', because we think we know them, but we do not. In A Midsummer Night's Dream, the poetry is immense; you are able to imagine things, which cannot be seen. Oberon and Bottom's poetry sticks out, because it is of high quality. In Shakespeare's plays, there are many complex lines. The poetry's quality has strength, to entertain and engage the audience. 'The raging rocks, and shivering shocks, shall break the locks, of prison gates; and Phibbus' car, shall shine from far, and make and mar, the foolish fates.' This bit of the play was spoken by Bottom, it is almost like a limerick but it is a bit longer. The rhythm makes it gripping, 'rocks, shocks, locks, car, far, mar.' ...read more.

In real life in Athens 400 years ago, I doubt it would be a happy ending for someone in Hermia's situation. The fairies put a spell on the lovers and Titania to sort the misunderstandings out, which the love potion caused. Oberon and Titania have both made up with each other, and as king and queen of the fairies they bless the house together. "Through the house give glimmering light By the dead and drowsy fire; Every elf and fairy sprite Hop as light as bird from briar, And this ditty after me Sing' and dance it trippingly. First rehearse your song by rote, To each word a warbling note; Hand in hand with fairy grace Will we sing and bless this place." This makes us feel apart of the play; a film cannot make you feel involved, like the theatre does. When a play is being put on the actors take the audience in great consideration. A Midsummer Night's Dream is still very popular, even after four hundred years, mainly, because people like to explore the different meanings. The play is part of the appeal of Shakespeare: people like to explore the different type of language that he used. A Midsummer Night's Dream is a great play to read and see because people enjoy watching love stories and comedies. This is what Bottom thought, ' I have had a rare vision. I have had a dream, past the wit of man to say what dream it was.' ...read more.