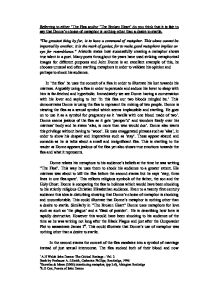 Referring to either The Flea and/or The Broken Heart do you think that it is fair to say that Donnes choice of metaphor is nothing other than a desire to startle.

Referring to either 'The Flea and/or 'The Broken Heart' do you think that it is fair to say that Donne's choice of metaphor is nothing other than a desire to startle. "The greatest thing by far, is to have a command of metaphor. This alone cannot be imparted by another; it is the mark of genius, for to make good metaphors implies an eye for resemblance." Aristotle states how successfully creating a metaphor shows true talent in a poet. Many poets throughout the years have used striking metaphorical images for different purposes and John Donne is an excellent example of this, he chooses unusual and often startling metaphors in order to validate his opinion and perhaps to shock his audience. In 'the flea' he uses the conceit of a flea in order to illustrate his l**t towards his mistress. Arguably using a flea in order to persuade and seduce his lover to sleep with him is far-fetched and hyperbolic. Immediately we see Donne having a conversation with his lover and saying to her 'in this flea our two bloods mingled be.' This demonstrates Donne is using the flea to represent the mixing of two people. Donne is viewing the flea as a s****l symbol which seems implausible and startling. He goes on to use it as a symbol for pregnancy as it 'swells with one blood made of two'. Donne seems jealous of the flea as it gets 'pamper'd' and wonders freely over his mistress' body and he states 'alas, is more than wee would doe'. ...read more.

This is shown in "The Broken Heart" as he personifies love telling us "Hee swallows us and never chawes". He tells us how love is merciless and brutal using the metaphor of a monster. Furthermore he compares love to a "tyran Pike". Donne is expressing how love is all consuming, violent and evil. This imagery is startling as compared to other poetry of his time. His use of metaphor in "The Broken Heart" seems violent as he expresses his opinion on love. It could be seen that his use of metaphor is nothing other than a desire to startle his audience because it was such a contrast from other poetry of the time. On the other hand Donne uses the metaphor of the flea because it is persuasive. Donne uses the metaphor for 'explaining, describing, expressing' and 'entertaining'. The metaphor of the flea is vital in this poem because 'a lot of our understanding of things is mediated through metaphor2'. Donne often uses a creative metaphor which he has constructed in order to express his emotions and feelings in a certain context, leaving it to his reader to deconstruct. In 'The Flea' Donne felt the need to set up a strong argument in order to win his mistress over. This was due to the nature of s****l intercourse out of wedlock, and the fear of either bearing an illegitimate child or being labelled as a 'fallen' woman. ...read more.

This shows that Donne is using metaphor in order to clearly explain his true emotions and not just to startle his audience. He explains how "ragges of heart can like, whish and adore, But after one such love, can love no more" This tells us that Donne can never love again now that his heart has already been broken. The metaphor of glass and rags clearly explains that once a heart is broken; though it can be fixed it will never be the same. This tells us that Donne uses metaphors in order to express his true emotions and not just to startle his audience. Critic R.G c*x states that 'At its best the metaphysical conceit communicates a unified experience; what matters is the sense of imaginative pressure and intensity.' I believe this view is clearly illustrated by Donne's use of the flea as a conceit. Through this conceit Donne clearly expresses his opinion of his mistress's chastity and not only startles the reader but sets up a witty and entertaining argument. This is also illustrated in the metaphors used in "The Broken Heart" as Donne expresses his true emotions about his heartbreak with "imaginative pressure and intensity". 1,869 words. ?? ?? ?? ?? 1 A.H Welsh John Donne: The Critical Heritage - Vol. 2 Book by Professor A. J.Smith, Catherine Phillips; Routledge, 1996 2Knowles & Moon (2006) introducing metaphor, (pp 2-6), Abington Rouledge 3R.G c*x, Poems of John Donne ...read more.