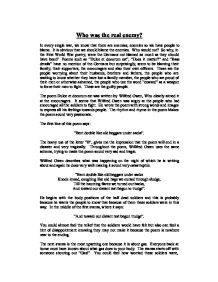 Referring to First World War Poetry, Explain Who was the real enemy?

Who was the real enemy? In every single war, we know that there are enemies, enemies so we have people to blame. It is obvious that we should blame the enemies. Who would not? So why, in the First World War poetry, were the Germans not blamed as much as they should have been? Poems such as "Dulce et decorum est", "Does it matter?" and "Base details" have no mention of the Germans but surprisingly, seem to be blaming their family, their supporters, the encouragers and also their own officers. These are the people worrying about their husbands, brothers and fathers, the people who are waiting to know whether they have lost a family member, the people who are proud of their men or otherwise ashamed, the people who use the word "coward" as a weapon to force their men to fight. These are the guilty people. The poem Dulce et decorum est was written by Wilfred Owen, Who clearly aimed it at the encouragers. It seems that Wilfred Owen was angry at the people who had encouraged all the soldiers to fight. He wrote the poem with strong words and images to express all his feelings towards people. The rhythm and rhyme in the poem Makes the poem sound very passionate. ...read more.

He points out that it was them who made soldiers go to war. Wilfred Owens tells them not to make youths go through what they did because they are very young and innocent. From Wilfred Owen's view, the real enemies are those who had pushed all the soldiers to fight. Base details is a poem about a soldier talking about the luxurious life that the officers had while the soldiers were suffering and dying. Sassoon makes their life style sound as if it is as good as heaven compared to the life of the soldiers during the war. This poem is also very passionate and you could feel the hatred that the poet had towards the Majors. Sassoon looks at the officers' point of view and also speaks as if he was an officer. Sassoon writes, "And speed glum heroes up the line to death". Sassoon is trying to give us the impression that the Majors knew that all the soldiers on the front line are going to die and knowing this, the officers stayed well away from the front line so that they are safe from dying. In the fifth line it says: "Guzzling and gulping in the best hotel". This line sounds as if the officers are very joyous and merry as if the war is not existing. ...read more.

They try to convince themselves that it is nothing to worry about. Sassoon is trying show to people that just because they are treating disabled people in a nice way it does not mean that they feel better about themselves but in fact they feel helpless. The effect of the sarcasm in the poem is the guilt of those who had encouraged the soldiers to go to war. Sassoon is taking the role of a person who had been encouraging soldiers and saying blatantly that losing your legs and eyesight is not so bad. He or she may be telling him to look at the advantages of being disabled. Unlike other poems this one does not talk about the war until the third stanza. At this point tries to show that this poem was for the people back at home. "And people won't say that you're mad" What all three poems were trying to say is that those people played a big part in the deaths and injuries of the soldiers. These poems and many more were written to get back at the people. Some men will not even speak of the war because it was obvious that people would not understand. All that they would think about is their heroes coming back from the war. From being the family and friends to the soldiers they have become the enemies. ...read more.