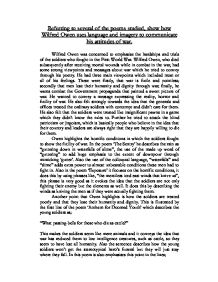 Referring to several of the poems studied, show how Wilfred Owen uses language and imagery to communicate his attitudes of war.

Referring to several of the poems studied, show how Wilfred Owen uses language and imagery to communicate his attitudes of war. Wilfred Owen was concerned to emphasise the hardships and trials of the soldiers who fought in the First World War. Wilfred Owen, who died subsequently after receiving mortal wounds while in combat in the war, had some strong viewpoints and messages about war which he tried to convey through his poetry. He had three main viewpoints which included most or all of his feelings. These were firstly, that war is futile and pointless; secondly that men lose their humanity and dignity through war; finally, he wants combat the Government propaganda that painted a sweet picture of war. He wanted to convey a message expressing the reality, horror and futility of war. He also felt strongly towards the idea that the generals and offices treated the ordinary soldiers with contempt and didn't care for them. ...read more.

It does this by describing the winds as kniving the men as if they were actually fighting them. Another point that Owen highlights is how the soldiers are treated poorly and that they lose their humanity and dignity. This is illustrated by the first line of the poem 'Anthem for Doomed Youth' which describes the young soldiers as; "What passing-bells for these who die as cattle?" This makes the soldiers seem like mere animals and it conveys the idea that war has reduced them to low intelligence creatures, such as cattle, so they seem to have lost all humanity. Also the sentence describes how the young soldiers won't get the stereotypical hero's funeral but they will just stay where they fall. In this poem is also emphasises this point in the lines; "Nor any voice of mourning save the choirs,- The shrill, demented choirs of wailing shells;" It adds emphasis by expressing the idea that they won't get splendid choirs to sing at their ...read more.

He also tries to convey the idea that the, generally young, soldiers were prematurely aged by the fighting. He does this in the poem 'Dulce et Decorum est' by writing "Bent double like old beggars under sacks" This shows how the once proud lively young men have been reduced to being aged, crippled and filthy. Another matter that Owen tries to deal with through his poetry is that he wants to combat the Government propaganda. He does this very effectively and bluntly in the last lines of the poem 'Dulce et Decorum est', "My friend, you would not tell with such high zest To children ardent for some desperate glory, The old lie; Dulce et Decorum est Pro patria mori." This is simply expressing that if anyone had been in the war they would not tell young men the same story as the Government propaganda which tells of the glories of dying for their country as they would realise the reality and true horror of war. ...read more.

This essay is a well-formed and well-analysed response, which makes a fair use of the three poems 'Anthem for Doomed Youth', 'The Sentry', and 'Exposure'. All three are used well and the focus on language and imagery is consistent throughout. ...

This essay is a well-formed and well-analysed response, which makes a fair use of the three poems 'Anthem for Doomed Youth', 'The Sentry', and 'Exposure'. All three are used well and the focus on language and imagery is consistent throughout. it is good to see a number of ideas established but the variety of linguistic devices identified could have a greater range. For instance, it is not only the adjectives, adverbial phrases and nouns that count towards Owen's poetic language power - sarcasm, second person address, questions and pauses for thought are all as important. It would be prudent to ensure that all manner of linguistic features are analysed, and whilst to a great extent here the candidate completes this task, a little more range would help bump the essay up to the top grades.

The Level of Analysis shown here is good, and the candidate regularly cites parts of the poem in order to accomplish this. The focus remains un-shifted on the language and imagery, as proposed by the question, so all analysis nicely links back to the question. I would urge the candidate however, to be more specific with the word they quote, as quoting large sections - even whole lines - in a poem can often lead to wasting time in an exam hall, as well as not earning any marks until you make some valuable comments on it. And so I recommend being more choose-y with your words and ensuring the words you quote are the ones you really need to save time and spend more time on the analysis.

The Quality of Written Communication is consistently good throughout. The candidate writes confidently and express their points well, although in some parts the discourse and word choice can lead to a lack of fluidity and a slightly contrived feel to the writing. This is not so much a problem here as it would be in an English Language essay, but do be careful and ensure that maximum clarity is retained throughout the answer where possible in the future.