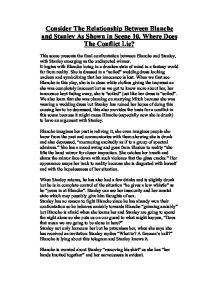 Relationship between Blanche and Stanley

Consider The Relationship Between Blanche and Stanley As Shown in Scene 10. Where Does The Conflict Lie? This scene presents the final confrontation between Blanche and Stanley, with Stanley emerging as the undisputed winner. It begins with Blanche being in a drunken state of mind in a fantasy world far from reality. She is dressed in a "soiled" wedding dress looking unclean and symbolizing that her innocence is lost. When we first see Blanche in this play, she is in clean white clothes giving the impression she was completely innocent but as we got to know more about her, her innocence kept fading away, she is "soiled" just like her dress is "soiled". We also learn that she was planning on marrying Mitch because she was wearing a wedding dress but Stanley has ruined her hopes of doing this causing her to be depressed, this also provides the basis for a conflict in this scene because it might cause Blanche (especially now she is drunk) to have an argument with Stanley. Blanche imagines her past is reliving it, she even imagines people she knew from the past and communicates with them showing she is drunk and also depressed, "murmuring excitedly as if to a group of spectral admirers." ...read more.

At the word "swine," Stanley's amicable mood evaporates. He gets annoyed by being degraded; this is a warning sign for later events. Blanche continues, recounting how Mitch arrived earlier that night to accuse her of the things that Stanley told him. Blanche claims that after she sent Mitch away, he came back in vain, with roses and apologies, she has once again slipped into her fantasy world as this is a lie. She tells Stanley that "deliberate cruelty is unforgivable", part of her problem stems from the fact that she feels she was cruel to her late husband and has never forgiven herself. Instead, she has repeatedly punished herself through cheap affairs and immoral behaviour, her statement comes at an ironic point, which is, just before Stanley is about to r**e her-an act of extreme cruelty. In spite of her actions, she is aware of the good qualities she is endowed with, and she thinks it is a pity that she has squandered them on unrefined people like Stanley and Mitch (by flirting with Stanley and by pursuing Mitch). She knows that she is a cultivated and cultured woman who can enrich a man's life. ...read more.

The jungle voices swell as Stanley slowly advances toward Blanche, ignoring her cries that he should stay away. She shows her fear by smashing "a bottle top" and threatening to "twist the broken end" in his face. He jumps at her, grabs her arm when she swings at him, and forces her to drop the bottle. Blanche is no match for Stanley. Williams indicates the impending r**e through Stanley's physical, animalistic, imposing body language. Like a snake, Stanley flicks his tongue at Blanche through his teeth. He corners her in the bedroom, refusing to move out of her way, then "springs" at her, calling her a "tiger" as he captures her. Blanche's silent resignation as Stanley carries her to the bed indicates the utter defeat of her will. Stanley is bringing down Blanche from the "big white pillars" like he did with Stella but there is not much l**t or love between he and Blanche but it is all about his power and him claiming the ultimate victory. Stanley's r**e of Blanche just before his child is born, when he is at his most triumphant and she at her most psychologically vulnerable, is the ultimate act of cruelty. The conflict lays in the very actions of Stanley and everything he stands for which Blanche is completely against. ...read more.