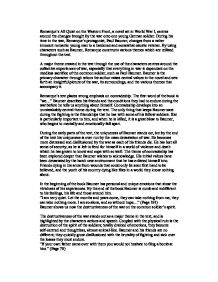 Remarque&amp;#146;s All Quiet on the Western Front,

Remarque's All Quiet on the Western Front, a novel set in World War I, centres around the changes brought by the war onto one young German soldier. During his time in the war, Remarque's protagonist, Paul Baumer, changes from a rather innocent romantic young man to a hardened and somewhat caustic veteran. By using characters such as Baumer, Remarque constructs various themes which are utilized throughout the text. A major theme created in the text through the use of the characters centres around the collective experiences of war, especially that everything in war is dependant on the needless sacrifice of the common soldier, such as Paul Baumer. Baumer is the primary character through whom the author raises central values in the novel and sets forth an insightful picture of the war, its surroundings, and the various themes that accompany it. ...read more.

The theme of comradeship has been explored deeper than Baumer wishes to acknowledge. His initial values have been devastated by the harsh new environment that he has enlisted himself into. Friends dying in his arms from wounds that could only be seen first hand to be believed, and the youth of his country dying like flies in a world they know nothing about. In the beginning of the book Baumer has personal and unique emotions that show the vividness of his experiences. By the end of the book Baumer is numb and indifferent to his feelings, his life and those around him. "I am very quiet. Let the months and years come, they can take nothing from me, they can take nothing more. I am so alone, and so without hope..." (Page 191) Baumer shows us now the destructiveness of the war on the common soldier's spirit. ...read more.

Many soldiers become natural killers, whilst others turn to jelly, weeping in the corner of a bomb shelter, too afraid to move into the open air where the scent of blood is heavy. "If it were simply a mistake in aim no one would say anything, but the truth is that the barrels are worn out. The shots are often so uncertain that they land within our own lines. Tonight two of our men were wounded." (Page 69) Essentially the closing moments of the text, describing Baumer's death, symbolize more than the death of one German soldier, it represents the hopelessness and meaningless of war. Baumer's death was as void of importance as every soldier's on the battle field, as men died they were piled into shell craters to clear the path for the healthy and mobile in order for them to make it to another location. The army mail stated that day, "There was nothing new to report on the Western Front" ...read more.