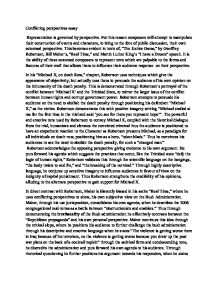 Representation is governed by perspective. For this reason composers will attempt to manipulate their construction of events and characters, to bring to the fore of public discussion, their own esteemed perspective. This becomes evident in texts of, T

Conflicting perspectives essay Representation is governed by perspective. For this reason composers will attempt to manipulate their construction of events and characters, to bring to the fore of public discussion, their own esteemed perspective. This becomes evident in texts of, "The Justice Game," by Geoffrey Robertson, Bill Maher's, "Real Time," and Martin Luther King's "I have a Dream" speech. It is the ability of these esteemed composers to represent texts which are palpable to the forms and features of their craft that allows them to influence their audience response on their perspective. In his "Michael X, on death Row," chapter, Robertson uses techniques which give the appearance of objectivity, but actually uses them to persuade the audience of his own opinion on the inhumanity of the death penalty. This is demonstrated through Robertson's portrayal of the conflict between 'Michael X' and the Trinidad State, to mirror the larger issue of the conflict between human rights and corrupt government power. Robertson attempts to persuade his audience on the need to abolish the death penalty through positioning his defendant "Michael X," as the victim. Robertson demonstrates this with positive imagery writing "Michael smiled at me for the first time in the trial and said 'you see for them you represent hope'". ...read more.

Through rhetorical questioning he further positions his argument towards his responders, when he states "What could be less patriotic then constantly screwing things up for America?" through his cynical and sardonic stance, he enforces his position and influence over his audience, asking them to question the motives of the American government. Through Maher's satirical text, he manipulates his audience to support the view, leaving no room for them to maintain a sense of objectivity. In his "Trials of Oz" chapter Robertson portrays the contradictory view points of a young rebellious movement, to a "conservative" and "out of touch," establishment. This is portrayed through his own personal perspective on the trial as a "collision of cultural incomprehension." First person narrative allows Robertson to maintain an authoritative persona and infuse his own subjective thoughts clearly. This is demonstrated through his undermining of personalities, to the opposing view points of Judge Argyle. Robertson clearly portrays this idea through the rhetorical question "where were we, the Soviet Union? These dissidents were stark, staring sane!" Through Robertson's use of condescending tone and alliteration, he points out the 'obvious' sanity of the defendants and in doing so discredits, the opinion of Judge Argyle, positioning his audience to question, the untapped power of the authority figure. ...read more.

King sustains this ideal of justice when he states, "the dark desolate valley to the sunlit path." The juxtaposition of the transcendent and metaphorical ideals of light and dark, present King's future hope for justice to the current repression. Through this juxtaposed image, King evokes the audience's emotions, similarly to Robertson, lifting them to a moral superior tone, in hope for justice, positioning them to believe in his agenda. Similarly to Robertson, King includes the perspective of, White racist Americans, to give further credibility to his perspective, in an attempt to appear to provide a balanced. This becomes evident through his strong imagery of past repression and subservience of Black Americans to White Americans when he states, "Mississippi, a state sweltering with oppression, sweltering with injustices" through his factual and geographical allusions, King trivializes the alternative perspective, appealing to the sense of morality and justice and thus positions them to believe in his argument for the "dream." When composers include conflicting perspectives, they project their own subjective viewpoint into their representation of personalities and events. However it is the audience's ability to deconstruct these representations, and identify such bias, to realize that a representation is always are reflective of the composer's own personal agenda. Thus composers will attempt to persuade their audiences on their own personal view, through the representation of conflicting perspectives. ...read more.


This is an excellent essay which is logically structured and fluently written. PEA is used throughout and literary and linguistic terminology is used accurately. Shows understanding of
writers' techniques and the effects on their audiences.