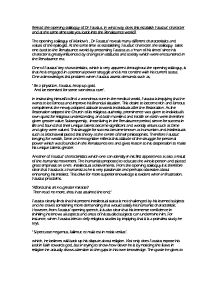 Reread the opening soliloquy of Dr Faustus. In what way does this establish Faustus' character and at the same time take you back into the Renaissance world?

Reread the opening soliloquy of Dr Faustus. In what way does this establish Faustus' character and at the same time take you back into the Renaissance world? The opening soliloquy of Marlow's , Dr Faustus' reveals many different characteristics and values of the epilogist. At the same time as establishing Faustus' character, the soliloquy takes one back to the Renaissance world by presenting Faustus as a 'man of his times' since his character is greatly influenced by changes in attitudes and society which were encountered in the Renaissance era. One of Faustus' key characteristics, which is very apparent throughout the opening soliloquy, is that he is engaged in a personal power struggle and is not content with his current status. One acknowledges this problem when Faustus asserts demands such as, ' Be a physician, Faustus, heap up gold, And be eternised for some wondrous cure'. In instructing himself to find a wondrous cure in the medical world, Faustus is implying that he wants to be famous and improve his financial situation. This desire to become rich and famous compliments the newly-adopted attitude towards individuals after the Restoration. ...read more.

Then read no more, thou hast attained the end;' Faustus clearly finds that his present intellectual status is not challenged by his learned subjects and he craves something more demanding that would satisfy his humanist characteristic. However, from Faustus' opening speech, it is also clear that his immense confidence in thinking he knows all aspects and areas of his studied subjects can undermine him. For instance, when Faustus tries to defy religious studies by implying that it is a pointless study he says, ' Si peccasse negamus, fallimur, et nulla est in nobis veritas'. which, he believes will back up his dispute about religion. Not only does Faustus expose his lack in faith towards god, but in trying to show how clever he is by noticing the flaws in religion he actually draws attention to the gaps in his own knowledge. The quote he gives to confront religious studies, is incomplete, and had he known the entire phrase, he would have realised that his point would have been contradicted rather than supported his argument. Therefore the opening soliloquy reveals that Faustus has no true religious faith, bares humanism traits and this great desire for knowledge can sometimes lead Faustus', who is overly-confident in his own knowledge, to draw attention to his incomplete education. ...read more.

His assertion of the limitations of law also emphasises his wish to, in the words of Tamburlaine a Renaissance intellect and hero of Marlowe, climb 'after knowledge infinite'. Therefore as the soliloquy progresses, one learns that Faustus is an individual against authority and is so serious about this cause that he will get involved with dangerous forces as well as, understanding that this anti-authority attitude is in context of Marlowe's time as it may be a result of the declining power of the church in the Renaissance era. The opening soliloquy of Dr Faustus reveals many of Faustus' characteristics such as him being a humanist, an individual against authority, a man with little religious faith who has an expansive, yet incomplete and flawed education. Faustus' first appearance also manages to transport one back to the Renaissance world by exposing some traits of the time which have shaped Faustus' personality, such as the impact which, the Reformation had on Faustus as well as his opinions formed on the traditional Renaissance curriculum. Therefore Faustus' characteristics show a reflection of the context of the play and whilst discovering Faustus' personality one also is taken back to the Renaissance world. ...read more.