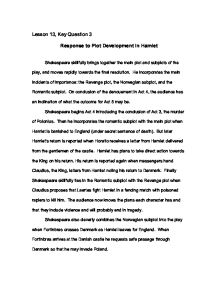 Response to Plot Development in Hamlet

Lesson 13, Key Question 3 Response to Plot Development in Hamlet Shakespeare skillfully brings together the main plot and subplots of the play, and moves rapidly towards the final resolution. He incorporates the main incidents of importance: the Revenge plot, the Norwegian subplot, and the Romantic subplot. On conclusion of the denouement in Act 4, the audience has an inclination of what the outcome for Act 5 may be. Shakespeare begins Act 4 introducing the conclusion of Act 3, the murder of Polonius. ...read more.

Finally Shakespeare skillfully ties in the Romantic subplot with the Revenge plot when Claudius proposes that Laertes fight Hamlet in a fencing match with poisoned rapiers to kill him. The audience now knows the plans each character has and that they include violence and will probably end in tragedy. Shakespeare also cleverly combines the Norwegian subplot into the play when Fortinbras crosses Denmark as Hamlet leaves for England. When Fortinbras arrives at the Danish castle he requests safe passage through Denmark so that he may invade Poland. The main plot, revenge , is most evident in scenes 5 and 7 of Act 4. ...read more.

Lastly, Shakespeare creates pathos with the death of Ophelia again when she has drowned herself sitting on a branch over a brook of water. In hearing this, Laertes is stricken with grief and sheds tears for his sister. It is clear that Laertes may erupt in rage again and Claudius urges Gertrude to follow him. Shakespeare moves rapidly towards the final resolution skillfully with the return of Laertes seeking revenge on his father's death, the death of Ophelia, and the plotting between the King and Laertes to kill Hamlet. The falling action of Act 4 prepares the audience for catastrophe in Act 5. ...read more.