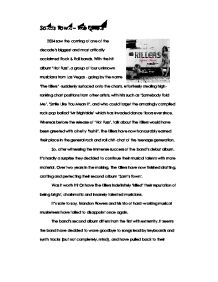 Sam's Town - The Killers 2004 saw the coming of one of the decade's biggest and most critically acclaimed Rock & Roll bands. With the hit album 'Hot Fuss', a group of four unknown musicians from Las Vegas - going by the name 'The Killers' -suddenly surfaced onto the charts, effortlessly stealing high-ranking chart positions from other artists, with hits such as 'Somebody Told Me', 'Smile Like You Mean It', and who could forget the amazingly compiled rock-pop ballad 'Mr Brightside' which has invaded dance floors ever since. Whereas before the release of 'Hot Fuss', talk about The Killers would have been greeted with a hefty 'huh?', The Killers have now honourably earned their place in the general rock and roll chit-chat of the teenage generation. So, after witnessing the immense success of the band's debut album, it's hardly a surprise they decided to continue their musical talents with more material. Over two years in the making, The Killers have now finished drafting, crafting and perfecting their second album 'Sam's Town'. ...read more.

Indisputably, this is one of those songs that will instinctively make you want to jump up and down (and then up again), with arms madly waving in the air and your head-banging at full throttle. The rhythm is seductive, the guitar arrangement delicious, and Flowers' voice agreeing perfectly with the demanding vocals to match the intense arrangement of the whole song. You are sad to hear the closing diminuendo at the end of the track, tempting you to rewind and press hard on the repeat button. Although, I would recommend that you hold back, before listening to what other charming trinkets the album has to offer. A clear-cut gem follows the previous legend; 'Bling (Confessions of a King)', is a delightfully powerful track that will keep your spirits and head high, right up until the last second. Standing out specifically are the expressive and striking lyrics, which are built up of poetic verses and complicatedly excellent metaphors. ...read more.

This of course leads onto the climax of the song, which is indeed a climax. The soft arrangement of instruments transform into a powerful ballad of guitar, drums and heavy bass. Flowers' vocals ascend to an even stronger display of enthusiasm. To overlook this awesome track would be a crime. We are then lead on to the last three tracks on the album. 'This River Is Wild' and 'Why Do I Keep Counting' are brilliant elements that form the album's finale. 'Why Do I Keep Counting' is a remarkable track and written with obvious personal feeling and zeal. The album ends with a pleasant track titled 'Exitlude', which is like 'Enterlude' with more zest. The track admirably waves goodbye and beckons us to return to the album. All in all, the album conclusively compliments the never-ending talent of this remarkable Las Vegas Rock & Roll foursome. So, does Sam's Town embody The Killers we all know and love? Does it deliver satisfying material, facing the high expectations the band have fashioned for themselves? In this reviewers opinion, they do, and more. ?? ?? ?? ?? ...read more.