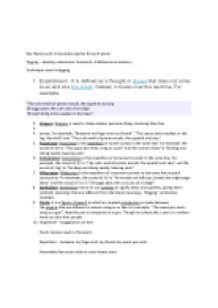 Through this is a reference back to the title and implies adults might view children's curiosity and inquisitiveness as something vain or ev ven selfish, as the character of Narcissus is viewed. MID TERM BREAK QUOTES AND ANAYLSIS About the death of heaneys infant brother and how Heaney and other people react to this. â€œI sat all morning in the college sick bayâ€ â€“ sense of islation and immediate suggestion of death. Stanza 2 2 in the porch I met my father crying he had always taken funerals in his strideâ€ â€“ sense the father is outwith the grief f the house, hiding his feelings. Death had been experienced before but not in this way. Foreshadows possible explanation fo who was the victim. â€œbig jim evans saying it was a hard blow! â€“ pun. Child was killed by a literal hard blow, while the family are metaphorically hurt â€œthe baby cooed and laughedâ€ â€“ baby is inncent and oblivious to the events and grief which surround it. Could be considered lucky â€œ and tell me they were sorry for my troublesâ€ â€“ euphemism anger that no one actually can be as sorry as he is Use of punctuationa dn full stops in fifth stanza accentuate the finality of the words and how his brother is gone for good â€œnext morning I went u pto his room - I saw him for the first time in six weeks. Paler now.â€ â€“ sense of guilt. Realisation that things happen while your away/ Heaney has a memory of his brother prior to this â€œ a four foot box a foot for every yearâ€ â€“ signifies the brieviety if childs life. Sadness. HAILSTONES KEY QUOTES AND ANAYLSIS Hailstones is a extended metaphor for painful memories. â€œmy cheek was hit and hitâ€ â€“ hit is relentless. Plosive sounds enforce the sense of force of pain. â€œwhipped and knowledgeableâ€ â€“ adjective whipped creates sensory imagery envisions the pain to the reader â€œthose brats of showersâ€ â€“ colloquial term â€“ young and annoying personified as a inconvenience plosive harsh and invasive. ...read more.

Of your brains exposed and darkened combs - Exposed' reminds us of the beginning when she's in the wind and vulnerable with a lack of free will. 'Darkened combs' refers to the combs of a brain - feels like we're entering her soul and mind with darkened suggesting doom and violation Connive in civilised outrage - Possible confession? with 'Connive' meaning to have secretly allowed something immoral to happen suggesting Heaney is implicit in the punishment due to him remaining mute 'Civilised outrage' oxymoron highlights the irony of the tribal cruelty in a time of supposed civilisation with no advancements STRANGE FRUIT KEY QUOTES AND ANAYLSIS Heaney wrote tis in response to one of the bog bodies. Highlighting the idea of the girls fate is ironic, to emphasie the point that our view of the past is wrng. Purpose is to see the individual lives lost in Ireland through religious conflict. Here is the girls head like an exhumed gourd - i mmediate similie makes us aware of H's focus on drawing parallels. Adjective exhumed implies she was dehydrated sucked out. Unsettling imagery. â€œgirlâ€ â€“ vulnerability and youth. Analogy of head serves to show how dehumanised we have become to murder /violence made an exhibition of its coil - criticising human exhibitionism of death. Voyeuristic pleasure. let the air at her leathery beauty - accentues her exposure, and uncomfortable, discordant vision of her 'beauty' perishable treasure - paradox of beauty and preciousness contrasted with sense that she is withering to re-iterate the discordance of beautifying death murdered, forgotten, nameless, terrible beheaded girl - list of adjs heightens her namelessness but the violence conveyed within each word is palpable and amounting. Lack of identity. outstaring axe and beatification, outstaring what had begun to feel like reverence â€“ beautufcation is from latin â€œblessedâ€ religious concept- Catholicism tah tdied can enter heaven. Heaney challenged by the empty stare of the dead. ...read more.