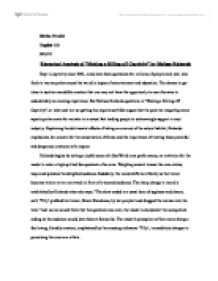 Rhetorical Analysis of Making a Killing off Captivity by Melissa Richards

Shrina Parekh English 110 9/15/11 Rhetorical Analysis of "Making a Killing off Captivity" by Melissa Richards Kept in captivity since 1961, orcas have been spectacles for millions of people each year who flock to marine parks around the world in hopes of entertainment and education. The chance to get close to such an incredible creature that one may not have the opportunity to see otherwise is undoubtedly an amazing experience. But Melissa Richards questions in "Making a Killing off Captivity", at what cost are we getting this experience? She argues that the positive image big-name aquatic parks create for animals is in actual fact leading people to unknowingly support a cruel industry. Explaining the detrimental effects of taking an orca out of its natural habitat, Richards emphasizes her concern for the conservation of Orcas and the importance of treating these powerful and dangerous creatures with respect. Richards begins by setting a joyful scene of a SeaWorld orca performance, an invitation for the reader to enter a high spirited fun spectacle of an orca. Weighing several tonnes the orca circles, leaps and splashes the delighted audience. Suddenly, the mood shifts horrifically as the trainer becomes victim to an orca attack in front of a stunned audience. The sharp change in mood is established by Richards when she says, "The show ended to a usual bout of applause and cheers, until 'Tilly' grabbed his trainer, Dawn Brancheau, by her ponytail and dragged the woman into his tank." ...read more.

She stresses the similarity between the reader and the orca species here, this creates familiarity. Moreover, she compares the habitat and behavior of orcas in the wild to those held captive in marine parks. Incorporating the opinion of a former Seaworld trainer (Jeffrey Ventre), a truly credible source considering her experience, the argument is strengthened by a bold statement. "the SeaWorld system is the best of all seaquaria in the world, if I was an orca, that would be the last place I'd want to live" This suggests that even at its best, marine parks and seaquarias are far from the ideal habitat for an orca. Ventre compares an orca tank to "an acoustically dead cement pond" emphasizing the numbing atmosphere of a captive orca's habitat. Case studies of orcas being neurologically and physically damaged because of captivity add credibility to Richards case. Due to "inadequate space in which to swim" (qtd Williams 52), the dorsal fins of an orca can collapse. This could happen as a result of colliding with the side of the small tank. The size of orca tanks can have great effect on the neurological stability of an orca where some have been documented to self induce physical damage. According to 'Listening to Whales' by Alexandra Morton, a young killer whale was observed "rushing over to a particular spot and banging her head against the underside of a dock". Swimming in circles and being separated from their families causes the orca to become neurotic. ...read more.

An aspect of her research paper that I would change would be the incorporation of the Vancouver Aquarium. The aim of Richards argument was to eliminate captivity in order to conserve the orca population and animal cruelty. However, she has shown Vancouver aquarium in a positive light by stating it "eliminates parallel surfaces, reduces noise transmission and improves acoustics within the water". Although Vancouver Aquarium vowed to end orca shows after the death of an orca in their aquarium, I believe Richards message in this quotation is that these conditions are acceptable for an orca in captivity. My personal belief is that no orca should be taken from their natural habitat and away from their pod at all. I believe that this article was written at a point in time that it was needed the most. Conservation and wildlife protection is of utmost importance as hundreds of species a day are rapidly moving towards extinction. This article has shown that we need to be more aware of how we treat animals. Ultimately, Richards has done a fantastic job of educating the reader about a topic that is alien to many. With the use of powerful statistics, thought provoking points and emotional case studies, she has produced a strong argument. The ultimate reaction I believe many readers will walk away from this article with is disappointment, distaste and disillusionment towards orca shows and marine parks. The next time one makes a trip to SeaWorld they must question whether they are going for a day of education and entertainment or whether they are supporting a business built on exploitation of innocent orcas. ...read more.