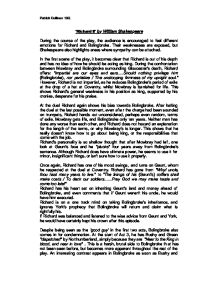 'Richard II' by William Shakespeare During the course of the play, the audience is encouraged to feel different emotions for Richard and Bolingbroke. Their weaknesses are exposed, but Shakespeare also highlights areas where sympathy can be attached. In the first scene of the play, it becomes clear that Richard is out of his depth and has no idea of how he should be acting as king. During the confrontation between Mowbray and Bolingbroke surrounding Gloucester's death, Richard offers: "impartial are our eyes and ears.....Should nothing privilege him (Bolingbroke), nor partialize / The unstooping firmness of my upright soul." However, Richard is not impartial, as he reduces Bolingbroke's period of exile at the drop of a hat at Coventry, whilst Mowbray is banished for life. This shows Richard's general weakness in his position as king, supported by his cronies, desperate for his praise. At the duel Richard again shows his bias towards Bolingbroke. ...read more.

Despite being seen as the 'good guy' in the first two acts, Bolingbroke also comes in for condemnation. At the start of Act 3, he has Bushy and Green "dispatched" by Northumberland, simply because they are "Near to the King in blood, and near in love" . This is a harsh, brutal side to Bolingbroke that has not been seen before, but becomes more apparent throughout the rest of the play. An interesting contrast appears in Bolingbroke as soon as Bushy and Green leave. The word 'dispatched' is used in its normal sense again by York (Bolingbroke's uncle), whom Bolingbroke is desperate to please after York had recently announced "I am no traitor's uncle". Bolingbroke is also guilty of having an ulterior motive for returning to England. If he was genuinely coming back to make sure he received his inheritance, than he wouldn't have needed to murder Bushey and Green. ...read more.

However, this may have added to his selfish attitude, thinking that there was no-one good enough to replace him on the throne. He is married to his French wife, and they have a very emotional seen through the streets of London as he is lead to the Tower. This would surely provoke sympathy from the audience, compared to the cold calculated Bolingbroke, who is hell-bent on seeking revenge for being robbed of his inheritance. The audience will understand more with a married character, rather than someone so driven and focused on one prize to miss out on settling down with a family. Finally, if Richard's army of Welshmen (Act II Sc. iv) had not left on a tip off that the king was dead, then they would have easily overpowered Bolingbroke's small force. This evokes sympathy from the audience, as they will all know what it is like to be so tantalisingly close to something, but still see it slip through their fingers. ?? ?? ?? ?? Patrick Cullinan 10Q ...read more.