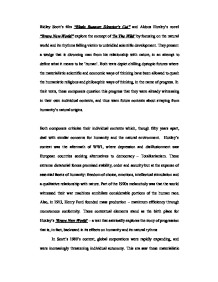 Ridley Scott's film &quot;Blade Runner: Director's Cut&quot; and Aldous Huxley's novel &quot;Brave New World&quot; explore the concept of 'In The Wild' by focusing on the natural world and its rhythms falling victim to unbridled scientific development

Ridley Scott's film "Blade Runner: Director's Cut" and Aldous Huxley's novel "Brave New World" explore the concept of 'In The Wild' by focusing on the natural world and its rhythms falling victim to unbridled scientific development. They present a wedge that is divorcing man from his relationship with nature, in an attempt to define what it means to be 'human'. Both texts depict chilling dystopic futures where the materialistic scientific and economic ways of thinking have been allowed to quash the humanistic religious and philosophic ways of thinking, in the name of progress. In their texts, these composers question this progress that they were already witnessing in their own individual contexts, and thus warn future contexts about straying from humanity's natural origins. Both composers criticize their individual contexts which, though fifty years apart, deal with similar concerns for humanity and the natural environment. Huxley's context was the aftermath of WW1, where depression and disillusionment saw European countries seeking alternatives to democracy - Totalitarianism. These extreme dictatorial forces promised stability, order and security but at the expense of essential facets of humanity: freedom of choice, emotions, intellectual stimulation and a qualitative relationship with nature. Part of the 1920s melancholy was that the world witnessed their war machines annihilate considerable portions of the human race. Also, in 1913, Henry Ford founded mass production - maximum efficiency through monotonous conformity. ...read more.

Both texts explore 'In The Wild' by demonstrating the ways in which scientific progress is divorcing humanity from its natural origins. The technocratic World State of "Brave New World" is populated by scientifically engineered beings - a complete subversion of the natural rhythms of the human life cycle. A love of nature has been satirically replaced with a love of "Our Ford" and it's hedonistic "orgy porgies". This parody of religion is a reflection of the spiritual depletion of the 'Roaring Twenties' and gives a god-like image to Henry Ford. Now, The World State has "applied mass-production to biology" - people are engineered by the 1000s and The World State even denies nature unless technology is integrally involved. However, the very existence of the necessary surrogates symbolizes the uncultivated nature of the natural order. In diametric opposition, a symbol of the 'old and uncivilized world' -is the "raw" human state of the Savage Reservation - an allusion to Democracy. John the Savage, from the Savage Reservation, rejects the "Brave New World": his characterization as someone who does not want fake "comfort" but rather the naturalness of "god, poetry, freedom and sin...I claim them all", is reinforced by the accumulation and personal pronoun. By contrast, inhabitants of the World State have been manipulated since their foetal state to fit the requirements of society and to "like their inescapable social destiny". ...read more.

The ultimate is the irony of Rachel saving Deckard from being shot by Leon. Roy Batty even displays a spiritual depth, the religious symbolism the dove (a symbol of the human soul) show that he has achieved humanity. to ask what it means to be human and conclude that genuine, natural emotions are of utmost importance to humanity. Whilst in "Blade Runner: Director's Cut", technology has destroyed emotions in humans but ironically created them in machines, in "Brave New World" technology simply suppresses them. These wildernesses embody what Huxley and Scott prophesize for our world and challenge whether progress is actually beneficial for humanity. prophesize for our world and challenge whether progress is actually beneficial for humanity. humanity being violated by the tyrannous science and technology. the natural world and its rhythms being violated by tyrannous scientific development In, Huxley virulently attacks this brutal desire to curb our natural state as humans. Also, after the invention of, caused by witnessing devastating,, he voices his disapproval of man's perpetual craving for technological progress by satirizing the eternal question of "will science be used for the good of mankind or to destroy it?" voice his own disgust of his context and the deteriorating relationship between man and nature. The very symbol of life - the elemental force of the Sun - is rendered powerless by the smog of this concrete jungle. (Reinforcing the values of materialism and Reagonism is the euphemistic retirement of the Replicants after which, they are collected like garbage.) ...read more.