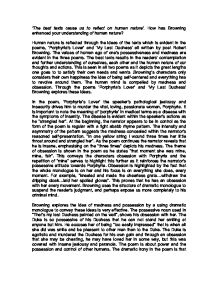 'The best texts cause us to reflect on human nature'. How has Browning enhanced your understanding of human nature? Human nature is reflected through the ideas of the texts which is evident in the poems, 'Porphyria's Lover' and 'My Last Duchess' all written by poet Robert Browning. The values of human ego of one's possessiveness and madness are evident in the three poems. The best texts results in the readers' contemplation and further understanding of ourselves, each other and the human nature of our thoughts and actions. This is seen in all two poems as it depicts the great lengths one goes to to satisfy their own needs and wants .Browning's characters only considers their own happiness the idea of being self-centered and everything has to revolve around them. ...read more.

As the poem continues the narrator reveals that he is insane, emphasising on the "three times" depicts his madness. The theme of obsession is shown in the poem as he states "that moment she was mine, mine, fair". This conveys the characters obsession with Porphyria and the repetition of "mine" serves to highlight this further as it reinforces the narrator's possessive attitude towards Porphyria. Obsession is highlighted by the fact that the whole monologue is on her and his focus is on everything she does, every moment. For example, "kneeled and made the cheerless grate...withdrew the dripping cloak...laid her spoiled gloves". This proves that he has an obsession with her every movement. Browning uses the structure of dramatic monologue to suspend the reader's judgment, and perhaps expose us more completely to his criminal mind. ...read more.